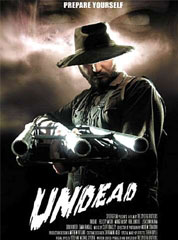 Synopsis:
Peaceful, rustic Berkeley is a charming fishing community where life is sweet and the people friendly. All that is about to change.

After losing her childhood farm to the bank, local beauty Rene decides to leave town and head for the big city. Suddenly, an avalanche of meteorites races through the sky, bombarding the town and bringing an otherworldly infection. Departing is going to be much more difficult than she had planned.

The living dead are awakened and Rene is now caught in a nightmare of zombies hungry for human flesh. She manages to find salvation in a small isolated farm house owned by the town loony, Marion. There she is met with four other desperate survivors. Together they battle their way through a plague of walking dead and discover that there is more transpiring than just an infection.


My Verdict:
Australia has not produced very many horror films, which the Spierig brothers, Michael & Peter, saw as a challenge. They have been making movies together since they were 10, winning many awards along the way for many different aspects of film-making. Undead is their first feature film.

Undead does not have any big-name stars and relies on many actors who have experience in short films. Perhaps Mungo McKay may be the most well known for his prolific work in over 60 short films. Mungo plays Marion, the town eccentric who has prepared himself for this day in the life of the town of Berkeley for a long time, predicting it would eventually happen. Marion has an arsenal of weapons at this disposal, the most fun being his triple shotgun. Marion fights the zombies and has to help protect a few misfits from the town who end up at his farm by default. The characters have been given a very ocker slant perhaps overdone at times.

Undead is a funny horror story, played straight for the most part. It is this aspect that is the most appealing and shows that the Speirig brothers were obviously having a good time creating this movie. Whilst it is never brilliant as far as the genre goes it is still very entertaining and definitely worth watching.