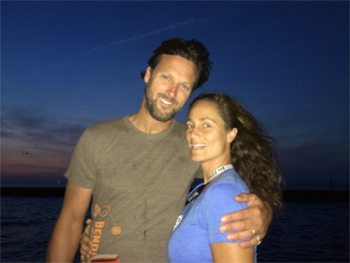 Synopsis: A fashion shoot in the desert goes horribly wrong when two hard-up rockers try their luck at robbing it.

Question: What inspired the story of The Shoot?

Toby Poser: John Adams (my creative partner and husband) was a model in the 90's, and he was always flying off to these exotic remote places all over the world. He's carried around this idea about a fancy model shoot (with all the expensive clothes and jewelry and equipment) that gets robbed in the middle of nowhere. If you take all the colorful characters you'd find on such a shoot and put them in a far-flung, brutal location where they are out of their element, like the desert, it makes for a great story.


Question: When did you first begin the project of The Shoot?

Toby Poser: In June 2013 we were driving across the United States with our kids (who are an integral part of our company, Wonder Wheel Productions), and by the time we got to the East coast from California, we'd pretty much blazed through our first outline for The Shoot. Road trips and hikes are where we do our best brainstorming. Of course, a lot changed by the time we shot in Spring of 2014, but that trip was the big 'Hold your nose and Jump!"


Question: How difficult is it to be on all sides of the camera of a film (writing, directing, acting and producing)?

Toby Poser: The hardest thing is turning on or off the 'Actor's brain," which is the one I've been using the longest, when I'm also in producing mode. Having acting experience is incredibly helpful as far as directing goes, but it's the producer in me that is thinking, 'We have to stay on schedule… Do we have our permit on hand if a ranger shows up? Are the actors safe and satisfied? The sun is setting! etc etc…." Meanwhile the nerdy actor in me just wants to focus on my character.


Question: What are the benefits of being so heavily involved in the entire process of a film?

Toby Poser: Wearing so many hats works great because by the time you're shooting, the storyline, the characters, all the fine details that keep the machine oiled are so ingrained in you, and now you just let all the pieces fall into place and do what they do. It's exhausting, but it's even more thrilling.


Question: What was the best and most difficult thing about working alongside your husband John Adams?

Toby Poser: After three feature films, John and I have learned how to talk to each other and navigate the bumps and ditches that go along with collaboration. Although we are two very different people with different creative processes " which is where we clash the most! " this works in the end. We balance each other well, and the work can only benefit from that. The best thing is that we share every extreme: the moments of exhaustion and doubt, and the moments of success and triumph. I love that.


Question: Can you talk us through the audition process of The Shoot?

Toby Poser: This was the first time we auditioned anyone, and it was such a cool experience. For our actress (Marina De Carvalho) who plays the model, Tasha, a friend had recommended her. So she sent a self-taped audition from New York, and we cast her on the spot. She floored us! Also her gumption to get the role really impressed us. Then we auditioned for the male model, Adam. John's agency, LA Models, set us up with a room and a bunch of actor-models, and we just interviewed them. We were confident we could get good performances out of our actors, but almost more important to us is that we work with people who get our style and who we like being around. We are a small crew, so this is paramount to our success. And we found not only our perfect Adam (Ryan Smith), but also our perfect Knut. We met Israieli-born Elad Ziv and rewrote the role of photographer, Knut, for him. So the interviews followed by self-taped auditions really worked for us. The rest of the cast we offered sans audition for the same reasons" these were people we knew would kick their roles out of the park, and we value their company.


Question: What did you enjoy most about the horror genre of The Shoot?

Toby Poser: I especially was interested in the emotional horror of survival in the desert…. The desert is such an extreme environment. The silence, or the sound of wind, the howling of coyotes; the heat of day and cold of night; the flats and the sharp rocky angles…. And in the middle of it, all these city folks totally out of their comfort zone.


Question: What was it like, on set, for The Shoot?

Toby Poser: It was fun as hell. We shot most of the film in the desert at Joshua Tree National Park, and the weather was kind to us. Our kids were there, too" Lulu is 16, Zelda is 11" and they help with the camera, sound mixing, and overall production running. We couldn't have gathered a more cool, game and supportive bunch of people, so it went very smoothly. One day, after a long shoot, a bunch of the actors surprised us back at the hotel with a full-blown BBQ they'd prepared. Ryan, our sweet Texan actor, had taken over the hotel's patio and was cooking up a storm. It was the best gift ever.


Question: What have audiences through of The Shoot?

Toby Poser: The Shoot has yet to have its debut. Festivals have been good to us, and we enjoy the opportunities they've presented, so we are hoping for a successful festival run first, then getting the film out there for a targeted theatrical run.

Toby Poser: John and I are working on three other screenplays, including a horror flick and a western.