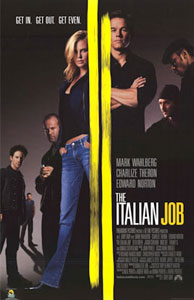 
Remakes rarely reach any great heights. Testimony to this fact is the woeful version of Psycho, The Haunting, and who can forget giant lizard (or should that be turkey?) Godzilla. As the original Italian Job contained what many consider to be the greatest car chase of all time, director F. Gary Gray had some huge shoes to fill. And surprisingly, fill them he does.

When Charlie's (Wahlberg) friend and mentor John (Sutherland) is murdered and his crew screwed out of an enormous gold heist by their former partner Steve (Norton), they vow revenge. They track him down one year later in Los Angeles, and enlist the help of John's daughter Stella (Theron), a professional safe cracker. But a paranoid Steve has more security than Fort Knox, and it's going to take the mother of all plans to steal their gold back. The idea? To engineer the largest traffic jam in L.A history, thanks to computer hacker Lyle (Green), and use their fleet of souped up Mini Minors in the ensuing chaos. But when Steve deduces he's being played, the real cat and mouse games begin.

A heist film with a degree of intelligence in much the same way The Bourne Identity was a spy film with a brain, The Italian Job both pays homage to the original but also forges its own contemporary identity. Wahlberg and Theron both have fun with their roles, and Norton is competent rather than being as brilliant as we know he can be.

It may be unfair to compare this film to the original as most of its audience probably would have no idea this is a remake. The Italian Job is good, popcorn munching fun, with some very funny running gags (Green's 'Napster' joke is a classic), and tautly directed action. And lets face it, any film that makes the 'Mini' look like a high performance muscle car is to be admired! Sit down, tune out and enjoy The Italian Job.