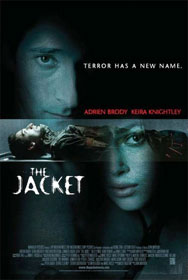 Terror Has A New Name

Synopsis:
Oscar-winner Adrien Brody ('The Piano') stars in 'The Jacket', an intense psychological thriller about a Gulf War veteran who finds himself trapped inside another terrifying scenario. Shot in the head while in Iraq, Jack Starks (Brody) has returned home only to be convicted of a murder that he didn't commit. Still reeling from his wartime trauma, Jack is found not guilty by reason of insanity and is committed to an institution for the criminally insane. Once there, he is drugged by the evil Dr. Becker (Kris Kristofferson) and placed into a coffin-like drawer on a nightly basis. Inside the drawer, after being tormented with horrific war flashbacks, Jack is mysteriously transported to the future, where he forms a tender relationship with the hardened, beautiful Jackie (Keira Knightley). Aware that he is destined to die in four days, Jack must use his new gift to figure out what happened to him, with the hopes of altering the course of history.

My Verdict:
Found not guilty of being a cop-killer by reason of insanity, Jack Starks (Adrien Brody) is sentenced to a psychiatric institute for the criminally insane, headed by Dr Becker (Kris Kristofferson), who uses controversial and unconventional treatments for his patients. One of these so-called treatments involves placing the patient in a straightjacket, drugging them and then placing them into a drawer in the mortuary. Once inside the drawer, the terrified patient hallucinates and experiences flashbacks under the influence of the drugs, only to be removed hours later, usually dehydrated and emotionally scarred from the horrendous ordeal. But with Jack Starks, this treatment has a twist in that he somehow travels in time, backwards and forwards. It takes a few treatments for Jack to realise just what is happening, and he uses this knowledge to alter his past and his future.

Although a love story involving time travel is not new, what is new here is the method of that travel. To be placed in a straightjacket would surely be distressingly claustrophobic, but to then be placed in a mortuary drawer whilst still conscious and under the influence of mind-altering drugs is almost beyond comprehension. It is this aspect of 'The Jacket' that is the most threatening to anyone's psyche and such an achievement for Adrien Brody to be able to undertake this task.

During his time in the straightjacket and in the drawer, Jack Starks, still suffering a form of amnesia after having been shot whilst on duty in the Gulf War in Iraq in 1991, discovers that he will soon die and so in a race against time, desperately tries to find the truth behind his imminent death. He meets Jackie ((Keira Knightley), whom he met years before when she was a young girl, and has a hard time convincing her it really is him, especially when she tells him that he is already dead.

'The Jacket' is really Adrien Brody's movie and he is just superb -there is nothing ordinary about his performance here and it's worth seeing just for his talent. Keira Knightley is adequate as the love interest, Jackie, as is Jennifer Jason Leigh as Dr Lorenson, who is as intrigued with Jacks dilemma as Jack is. Kris Kristofferson could have been a little more evil with his role as the cruel Dr Becker and in a small role, Daniel Craig is outstanding as another patient at the institute.

Not a traditionally scary movie, there is still a lot to be scared about in 'The Jacket'. The use of time travel here is perhaps a wee bit corny, but with the performance from Brody, it can be overlooked.