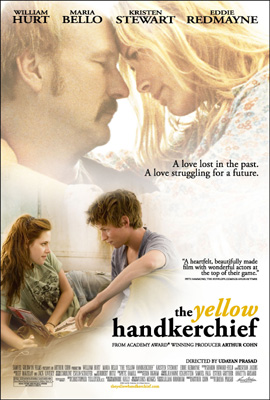 A love story at its core, THE YELLOW HANDKERCHIEF is about three strangers of two generations who embark on a road trip through post Katrina Louisiana. Along the way, relationships forge and change in a myriad of ways, leading to the possibility of second chances at life and love.

Brett Hanson (William Hurt) dealing with a painful past, crosses paths with Martine (Kristen Stewart), a troubled teenager ,and her new ride Gordy (Eddie Redmayne). The trio head out together, each motivated by his/her own reasons: Brett must decide whether he wants to return to the uncertainty of his life and his ex-wife May (Maria Bello) for whom he longs, Martine yearns to escape her family and Gordy hopes to get close to her.