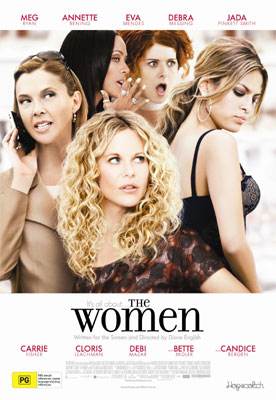 "The Women" is about friends and mothers and daughters. It's about breaking up and finding your way back. It's about reinventing yourself. It's about walking through fire for what you believe in. It's about Women.

Diane English, the creator of "Murphy Brown", has gathered an exceptional cast for the remake of George Cukor's 1939 classic. Her script maintains the arch spirit of the original, and the all-female cast, but the women aren't as relentlessly catty this time around. The story follows a group of female friends when the one they envied most discovers her husband is cheating on her.

A comedy of style and substance, The Women is a classic story about a New York circle of friends and the power of female relationships. When fashion designer Mary is suddenly confronted with a cheating husband, the ladies in her life quickly rally to her side. This smart and sparkling valentine to contemporary womanhood features one of the most brilliant all-female, all-star casts ever assembled including Meg Ryan, Annette Bening, Eva Mendes, Jada Pinkett Smith, Debra Messing, Candice Bergen and Bette Midler.

Diane English, the creator of "Murphy Brown", has gathered an exceptional cast for the remake of George Cukor's 1939 classic. Her script maintains the arch spirit of the original, and the all-female cast, but the women aren't as relentlessly catty this time around. The story follows a group of female friends when the one they envied most discovers her husband is cheating on her.

Mary Haines (Meg Ryan) is a successful wife, mother and designer for her fathers fashion business. She discovers much to her surprise that her husband is having an affair with a "spritzer" girl (Eva Mendes) who works in the perfume department at Saks on Fifth Avenue, New York. Armed with this information, Mary sets about with the help of her closest girlfriends to transform her life and prove she can cut it without a man in her life. Lessons are learned along the way, including the evolution of the relationship with her teenage daughter.

Based on George Cukor's 1939 movie and Clare Luce Booth's 1936 stage play, Diane English has updated, written and directed The Women. Set in modern day New York, The Women is a movie that almost exclusively features women - the men in many of their lives are mentioned but there are very few scenes that actually show men exist, let alone feature them. This is a story about women and their relationships with each other.

The Women is often disappointing given the calibre of some of the cast who are either under-used or who end up becoming character clichés. As the lead, Meg Ryan seemed tired with the whole story and often appeared to be just going through the motions. Annette Bening tried hard with a predictable role but was limited by the often clichéd script which would probably have been appropriate when it was originally made but the update hasn't really worked, reducing many of the roles to well-worn stereotypes. Debra Messing's character fluffed about as a ditzy and frazzled mother, Jada Pinkett Smith's character was portrayed as an angsty lesbian who randomly appeared with no real link to the story and Eva Mendes gets to show off her body in lingerie and tight fitting clothes. Fortunately Cloris Leachman's performance as the housekeeper in the Maine household is one that is at least interesting and worth waiting for, as is Debi Mazar as an over-the-top gossip manicurist and Candice Bergman as Mary's mother who is trying hard to make it work. All of these women at least appeared to actually want to be there unlike many of the others who end up looking tired. An all-too-brief cameo by Bette Midler is also at least something to raise the heartbeat of the whole episode.

Overall, The Women is a fairly ordinary chick flick that might satisfy some that really have nothing better to do but if you are after something with some guts, this isn't it which is a pity given the cast list.