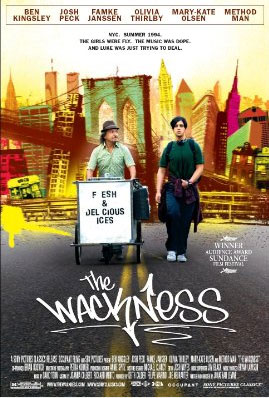 Sometimes It's Right To Do The Wrong Things

In the sweltering summer of 1994, Rudy Giuliani is scouring New York City within an inch of its life, hip-hop is permeating white youth culture, and a pot-dealing loser kid, Luke Shapiro (Josh Peck), is trying to figure out how to solve his parents' insolvency, beat depression, and get laid before pushing off to college. Luckily he's got a nifty deal with a psychiatrist, Dr. Squires (Ben Kingsley), who trades him therapy sessions for weed. As Luke falls for a classmate who just happens to be Squires's daughter, the summer heats up, and he follows doctor's orders, learning to coexist with pain and make it part of him, rather than let it become his downfall. Perfectly capturing the zeitgeist of 1990's Manhattan, The Wackness plays like the luscious rush of first love, discovering great new music, meeting amazing personalities who impart the meaning of life, and realizing what you're made of.

Luke Shapiro (Josh Peck) is just trying to survive his teenage years. With his parents continually fighting due to financial difficulties, Luke spends much of his time fighting his own depression whilst peddling drugs under the guise as an ice-cream seller. Luke finds an ally in one of his customers who is also his psychiatrist, Dr. Squires (Ben Kingsley), and it's Squires' stepdaughter who becomes a romantic target for Luke as he stumbles his way through the latter parts of his high school year. Together, Luke and Dr. Squires form an unlikely alliance that opens new territory for them both and leads them on the path to happiness.

Set in the urban culture of a sweltering New York in the summer of 1994, when new mayor Rudy Giuliani introduces new rules and hip-hop is slowing permeating new ground, The Wackness is not your average coming-of-age teen drama filled with predictable cheesy lines but rather a more realistic view filled with witty one-liners and insights that can only appear from experience.

Josh Peck delivers all that is needed to make the character of Luke believable and likeable, especially when his heart is broken. Along with Ben Kingsley, Peck carries the film and does so credibly, rarely faltering and with the right dose of teenage angst and uncertainty. He yearns for his parents to resolve their problems, for a genuine romantic partner (Olivia Thirlby) and for answers to life in general - what else is there for a teenager to think about? Writer and director Jonathan Levine obviously has empathy with the scenario and has created a fresh retrospective take, not necessarily with the aim of providing answers, but merely offering a perspective instead.

As the habitual drug-taking, world-weary and disillusioned Dr. Squires, Ben Kingsley (doing a great unintentional? Harvey Keitel impersonation) - is quite brilliant and so convincing, with his character appearing to need a psychiatrist even though he is one. His cynical approach to life fully encompasses his life from his job to his second marriage to Kristin (Famke Janssen), who is as bored with her life as he is. It is only his relationship with Luke where a glimmer of light is found and they begin to resolve issues because of and in spite of each other. Added to this is his relationship with his stepdaughter Stephanie (Olivia Thirlby), which intersects with Luke's life and just adds to the complexity of his life.

The supporting cast do just that - support and do it adequately, including Method Man as the local drug supplier and Famke Janssen doing a convincing job of looking uninterested in her life. Mary-Kate Olsen as a drug-addled bohemian-type was perhaps superfluous and one of the only cast to appear to be trying too hard.

Some loose ends are neatly tied up near the end but enough are left to the imagination as Dr. Squires and Luke end their cathartic summer together and move on with their lives in this sometimes moving, clever and insightful snapshot of New York in 1994, leaving no doubt that any of these situations would certainly have taken place. The Wackness certainly does live up to its name.