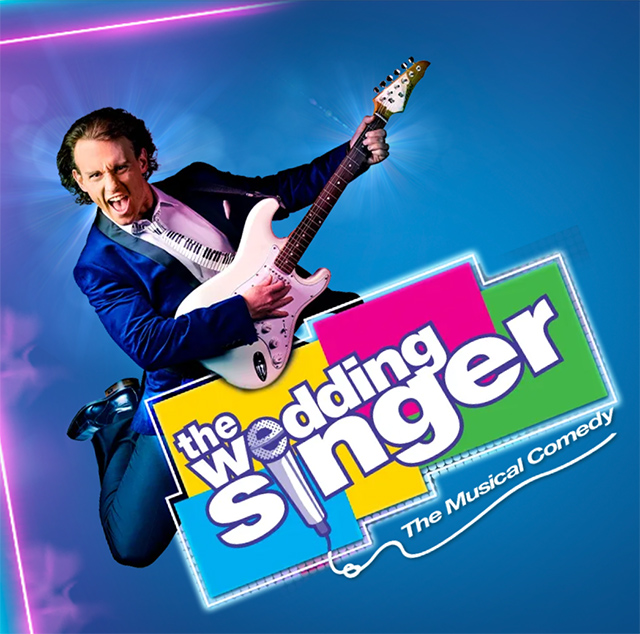 Following a nationwide call out that saw over 600 applicants, the stars of the Australian premiere of The Wedding Singer have been cast! More performers and creatives are set to be announced for this hilarious Broadway musical, touring the country from 9 April.

Starring opposite the Helpmann Award nominated musical queen is gifted, multi skilled performer Christian Charisiou in the title role of Robbie Hart, originally created by Adam Sandler in the film. A NIDA graduate experienced in TV, film and theatre, this is Christian's first leading role in a main stage musical. A natural at comedy, he is also one of the stars of the animated Maya the Bee 3: The Golden Orb, in cinemas now.

The villain (ok, fiancée) of Wouter's Julia, the annoyingly obnoxious Glen Guglia, will be performed by Stephen Mahy, one of Australia's original Jersey Boys with recent principal roles in The Rocky Horror Picture Show, Saturday Night Fever and Mamma Mia! He also reached the top 12 in Channel 10's I Will Survive, proving just how much he (and his voice) can thrive.

Rounding out the lead cast is Adelaide's vivacious true-triple-threat Nadia Komazec as Holly (who teaches Robbie what a good kiss really is), the wildly charismatic Ed Deganos as George who toured with The Lion King for Disney Theatrical Productions, and celebrated character performer Susan-ann Walker as Robbie's adventurous, hip and sometimes naughty Grandma, Rosie.

All the cast are thrilled to be bringing live theatre back to Australian audiences.

"I feel incredibly excited to be cast in the lead role of a major musical, particularly following the chaos of 2020. The Wedding Singer really amplifies the humour, love and all-out '80s fun of the movie...I can't wait for audiences to see it!" says Christian.

"The movie came out when I was in high school, so there is a lot of nostalgia around it for me personally. It's going to be a very silly and outrageous trip back to the '80s and feels like it's exactly what we all need right now!" says Teagan.

From 9 April, Adelaide, Melbourne, Gold Coast and Sydney audiences will be treated to this feel-good, romantic musical. It's 1985. Hair is huge, collars are up and a wedding singer is the coolest guy in the room. Remember cassette players, ATARI, and slap bands?

Brought to you by David Venn Enterprises (BRING IT ON! THE MUSICAL), tickets are on sale now via weddingsingermusical.com.au.

Following performances on Broadway and across the UK, this feel-good musical features all your favourite characters and a sparkling new soundtrack that does for the 80s what Hairspray did for the 60s.

The Wedding Singer features music by Matthew Sklar (Elf The Musical), lyrics by Chad Beguelin (Aladdin), and a book by Beguelin and Tim Herlihy. A long-time collaborator of Adam Sandler, Tim wrote the classic hit films Happy Gilmore and Billy Maddison, as well as several other Sandler-starring blockbusters in addition to The Wedding Singer.

COVID Safe measures will be in place for all performances, as per government regulations. More information is available via the websites for each venue.

Come join the party and support the return of Australian theatre!

Bringing the 80s to life, The Wedding Singer Musical is the ulitmate feel good musical, full of life, colour, comedy, abundance of 80s flair, this is one musical not to miss. Stand out performances from Christian Charisiou who brought so much energy and comedy to his character Robbie Hart, Teagan Wouters vocals were astonishing, Nadia Komazec as Holly was flawless and made me want to join the naughty list, but I'd also like to mention Kirby Burgess who really went to town with her character Linda, taking comedy to the next level and outstanding vocals. Brilliant!

Fabulous choroegraphy, cleverly executed, The Wedding Singer will have you dancing in your seat.  Hats off the writers, producers, cast, costumes & set design, musicans and everyone involved, I loved everything about this musical, even down the the quirky Atheneaum that it's playing in.  So uplighting, great night out.