Synopsis: An outrageous comedy in which four everyday suburban guys (played by Ben Stiller, Vince Vaughn, Jonah Hill & Richard Ayoade) come together to form a neighborhood watch group, but only as an excuse to escape their humdrum lives one night a week. But when they accidentally discover that their town has become overrun with aliens posing as ordinary suburbanites, they have no choice but to save their neighborhood -- and the world -- from total extermination.

In this seemingly serene enclave and safe haven, Evan Bob, Franklin and Jamarcus have decided to join forces to safeguard their community. In addition, they're enjoying some of the perks that come with being a "Watcher"… like drinking beer, shooting the shit, and just being guys.

Even with - or maybe because of - their spiffy new "Watch" jackets, which are emblazoned with fiery wings and a tiger head (don't ask), the not-so-fearsome foursome initially gets no respect from the residents they're supposedly looking out for. A group of kids plaster them with eggs, and the local cops think they're a joke: the Hardy Boys…only far less savvy.

But when the guys' patrol vehicle hits something that leaves behind a trail of green goo and a tentacle of some sort, and they find a strange, bowling ball-like device that emits a concentrated beam of energy - they realise that their little group has stumbled onto something bigger than a prowler on the loose.

"When they formed this 'band of brothers', the guys thought, sure, they might encounter some weird neighborhood stuff - maybe a burglar here, or peeping tom there - but suddenly they realise they've facing something extraordinary," says producer Shawn Levy, the director of such hits as "Night at the Museum" and "Real Steel." "And The Watch is not just unprepared or unqualified, it's not remotely equipped to deal with this problem; yet it's all on them to stop it."

To play the four members of "The Watch," Shawn Levy and director Akiva Schaffer (a creative force on several famed "Saturday Night Live" short films) tapped three comedy icons and a fast-rising talent. "We wanted the best," says Shawn Levy," and so we went out and got the best - three titans …together in the same movie! And then we threw in the 'grenade' of 'what the hell are you going to get with Richard Ayoade?'" 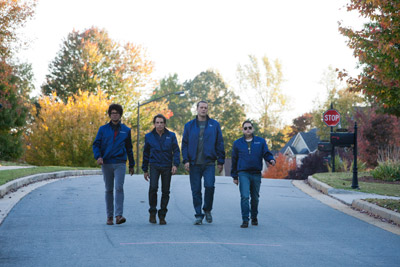 Ben Stiller's Evan is a senior manager at the superstore Costco, having made a not-so-lightning-fast ascent to that position from assistant manager. Evan is a dedicated employee, but his heart is with the Glenview Neighbourhood Watch, of which he is the founder and CEO.

Evan's latest endeavor fits nicely within his wheelhouse of facilitating civic-minded endeavours; he's also organised the Glenview Running Club, Recycling Team, and even a Spanish table at the community center. "Evan is very community-oriented," says Ben Stiller, "because he has so few friends, and these clubs give him the opportunity to meet new people." Adds Akiva Schaffer: "Evan is a Good Samaritan, a perfectionist, and a control freak - but in a good way."

Evan's straight-laced, buttoned-down personality is a perfect fit for organising clubs, but it's not paying off socially. Ben Stiller says he found it challenging to figure out the mindset of a man whose life is defined by a relentless pursuit of order. "I'm not very orderly," explains the actor, who is currently starring in and directing "The Secret Life of Walter Mitty." "It wasn't easy getting inside the mind of a meticulous, stoic and organised guy."

Regarding the role's more physical requirements, Ben Stiller was comfortable with the fight scenes, where The Watch takes on the would-be conquerors from a distant world, but less so with a scene that required him to drive a forklift during a climactic battle. "There was lots of action captured on camera, but driving the forklift made for some of the most frightening times on the set - for the crew," says the actor.

Evan's polar opposite is Vince Vaughn's Bob, who is the id to Evan's superego, the yang to his yin, and, says Schaffer, "a fun loving family man - to the max." For Bob, The Watch is his fraternal Shangri-La - an escape from the everyday responsibilities of family life. The Watch means hanging with his new friends; enjoying some titty magazines, dirty jokes, and beers; and saying things like, "We're gonna tear up shit, boys."

"Bob is longing to hang out with the guys, have some drinks, talk about guy stuff, and let off some steam," says Vince Vaughn. And ground zero for all the raucous fun is Bob's tricked-out garage/man-cave and its wet bar, massage chairs, widescreen TV, and pool table.

"Bob is a big Teddy bear of a guy," says Shawn Levy, who is currently directing Vince Vaughn, along with Owen Wilson, in the comedy "The Internship." "He's boisterous and gregarious and in The Watch as much for the bromance as for the responsibilities of ensuring his neighbors' safety."

Still, the responsibilities of family do weigh heavily on Bob, who loves his wife and teenage daughter; the latter's blossoming attributes are capturing the attentions of the opposite sex, and dad is not happy about it. "She's growing up faster than Bob would like, so he's trying to keep her under lockdown," says Vince Vaughn.

The youngest member of the team is Franklin (Jonah Hill), a twentysomething, militant looking tough guy with, notes Akiva Schaffer "a sweetness just underneath." (He still lives at home with his mom.) Franklin has a planet-size chip on his shoulder because he's been rejected as a candidate for the police force and all other law enforcement organisations. (Failing every entrance exam didn't help.) So for Franklin, The Watch is the only way he can legally kick ass and take names. "Franklin is alienated from, well everything," says Jonah Hill. "He's very strange and very funny."

Coming off his Oscar®-nominated performance in the drama "Moneyball," and executive producing and starring in the critically-hailed hit "21 Jump Street," Jonah Hill was not looking to return to the kind of raucous comedy that had propelled him to superstardom (like "Superbad" and "Pineapple Express"), but he "couldn't resist the chance to perform opposite alongside Ben Stiller, Vince Vaughn and Richard Ayoade," notes the actor. "It was something I had to do." Moreover, "if I was going to do another broad comedy, I wanted it to have no basis in reality, and portray a character that could say or do anything. Plus, anytime you put an extreme amount of danger in the hands of irresponsible people, you know the results are going to be really wild."

Rounding out the quartet is Jamarcus, newly divorced and perpetually hungry for love, and who eagerly embraces The Watch's off-kilter camaraderie. "Jamarcus feels that The Watch is an opportunity to burst out of his shell," says Richard Ayoade, who is also a noted filmmaker, having written and directed the acclaimed British film "Submarine." Adds Akiva Schaffer: "He's just looking to get out of the house and meet some ladies - and have sex with them."

On the surface, Jamarcus is kind of an odd duck (and that's saying a lot in this group), but he may prove to be a secret weapon in the looming battle against the forces threatening the neighbourhood. Shawn Levy says it was Richard Ayoade's "idiosyncratic energy" that made him perfect for the role. "He's wildly inventive and completely strange in the best possible way. You never know what you're going to get next with Richard Ayoade."

"Richard Ayoade is the one the audience isn't expecting, so he can sucker-punch them…with lovable jokes," Akiva Schaffer concurs.

Of her experience working with the four comedy pros, DeWitt, who has appeared in several dramatic roles, notes that "it was a little bit like you're training for your whole life to be a long-distance runner, and they put you on the Olympic swim team!"

The actors and filmmakers were determined to bring an audacity and boldness to The Watch. "The film's DNA doesn't feel familiar," notes Shawn Levy, "so we needed a director with a fresh sensibility and who would never play it safe." Enter Akiva Schaffer, who directs, co-writes and edits most of the iconic "SNL" Digital Shorts, including "Dick in a Box," "Lazy Sunday," and "Natalie Portman Rap." Says Ben Stiller: "Akiva Schaffer has a comedy chip in his brain. He's a genius editor and a true child of the digital age." Adds Shawn Levy: "Akiva Schaffer has helped create landmarks of our digital comedy culture, and he's all about pushing boundaries."

The script required that same level of envelope-pushing. "We had a great script from [co-screenwriter] Jared Stern, but we didn't want to play it safe and we were determined to make it daring and unexpected," says Shawn Levy. Seth Rogen and his writing partner Evan Goldberg, who had collaborated on screenplays for "Superbad" and "Pineapple Express," came aboard the project, and their script delved deeply into the group's skewed dynamics, as much as it did the characters' showdown with the unwanted guests.

"The alchemy of the script and Akiva Schaffer's unique voice felt like a really good match," says Shawn Levy. "This is the real thing, not only in its use of language but in its sensibilities, which far exceed the boundaries of good taste."

Beyond the R-rated hilarity lies a story about four guys who were not complete, or their best selves, until they joined forces. As Bob admits to Evan: "You took a ragtag group of misfits and taught us there was something bigger than a few beers and some bro-time. You taught us about community and how important it is."

At its core, The Watch is a story with universal appeal (as long as the universe encompasses those age 17 or older, unless accompanied by parent or adult guardian). "It's about four regular guys who might remind you of your brother, dad or husband," Shawn Levy sums up. "Suddenly, they come together to battle something they have absolutely no clue how to deal with."

And when it comes to friendship, marriage, career, family - or protecting the world - it's always best to Watch out for one another.