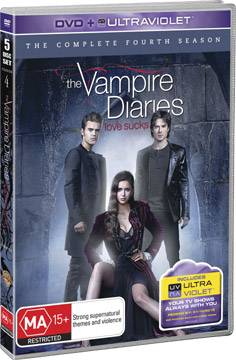 SINK YOUR TEETH INTO THE DVD OR BLU-RAYTM

CONTAINS ALL 23 EPISODES FROM THE FOURTH SEASON PLUS OVER ONE HOUR OF NEVER BEFORE SEEN EXTRAS.

The Vampire Diaries delivers another gripping season to home video on October 2nd, 2013, as Warner Bros. Home Entertainment Group releases The Vampire Diaries: The Complete Fourth Season on Blu-ray™ and DVD.  Fans can feast on all 23 one-hour episodes from Season Four, plus a host of thrilling extras.

Season Four starts off with everything in transition. Senior year is finally here, and Elena should be having the time of her life. Instead, she faces her worst nightmare, struggling with the painful transformation from human to vampire. As Damon mentors Elena into a supernatural life, their repressed passions explode, causing Stefan to undertake a desperate quest to restore humanity to the girl he adores. But as Elena ruthlessly quenches her newfound thirst for blood, and her friends race to find a vampire cure based on clues inked onto Jeremy's flesh, the world around them falls prey to a host of sinister forces. Mystic Falls takes on vampire hunters, a hybrid rebellion and more in all 23 Season Four episodes.

to their computers, tablets and smartphones. The UltraViolet episodes are a limited-time offer. Restrictions and limitations apply. Go to ultraviolet.flixster.com/info for details.

Review: The standout for this series is Ian Somerhalder, his shades of light and dark and sarcastic tone draw you to his fascinating character.