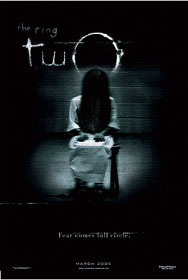 Synopsis:
Academy Award® nominee Naomi Watts ("21 Grams") reprises the role of investigative reporter Rachel Keller in "The Ring Two," the sequel to the 2002 horror hit "The Ring." Hideo Nakata, the director of the original Japanese blockbuster "Ringu" upon which the "The Ring" was based, directed "The Ring Two," which marks his American film debut.

The story picks up six months after the horrifying events that terrorized Rachel Keller and her son Aidan (David Dorfman) in Seattle. To escape her haunting memories, Rachel takes Aidan and moves to the small coastal community of Astoria, Oregon, to start fresh. However, Rachel's resolve quickly turns to dread when evidence at a local crime scene-including an unmarked videotape-seems eerily familiar. Rachel realizes that the vengeful Samara is back and more determined than ever to continue her relentless cycle of terror and death.

My Verdict:
In 1998, director Hideo Nakata was responsible for 'Ringu', the highly successful Japanese movie that this English version is based on. 'Ringu' became the highest grossing film in Japanese movie history, was based on a series of horror novels by Koji Suzuki and changed the horror genre by redefining the core and structure from one of special effects focus to one of character and storyline focus.

'The Ring' (2002), starring Naomi Watts, tells the story of a cursed videotape that doomed anyone who watched it to a terrible death in exactly seven day and was a highly successful movie so it seemed inevitable that a sequel would follow. Watts adequately reprises her role as single mother Rachel who has moved cities with her son Aidan (a creepy enough David Dorfman) to start over after what is initially unclear, especially if you haven't seen the first instalment, but it soon becomes apparent that Aidan has suffered at the hands of a ghost called Samara that wants to invade his body as it badly wants a mother. It is just a matter of time for Rachel to investigate and search for a deeper history of Samara's life, including a trip to visit her mother (played by Sissy Spacek), in order to save Aidan from Samara invading and taking over his body.

This is a relatively slow-paced movie, with suspense not coming from a creepy soundtrack, but from character development - as time passes, Aidan's behaviour becomes creepier and creepier and it's obvious something evil is happening to him. Special effects are not abundant although they are used, with a bathroom scene being a particularly clever one and a rather unnerving episode where a group of stags attack Rachel and Aidan in their car. Gary Cole is under-utilised in his role as a real-estate agent, Martin Savide, which was disappointing as was Elizabeth Perkins in her role as a psychiatrist, Dr Temple, who is appointed to Aidan when he arrives at hospital after suffering from hypothermia.

Unfortunately 'The Ring Two' is a very average horror movie with not enough scares to really make your spine tingle and seems a case of a sequel being made in a hurry to capitalise on the success of the first movie, which is a pity as it has much more potential than is evident.