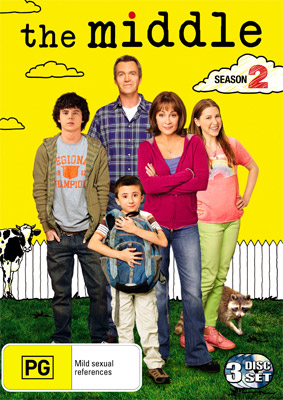 The hit series stars Emmy® winner Patricia Heaton (Everybody Loves Raymond) as a devoted but overextended wife and mother, who tackles her family's endless demands with humour and heart.

Titled The Middle: The Complete Second Season, this DVD collection will feature all 24 half-hour episodes and never-before-seen bonus material. Frankie Heck (Patricia Heaton) is a harried wife and working mother who uses her wry wit and sense of humour to try to get her family through each day intact. Neil Flynn (Scrubs) stars as her sardonic husband Mike, who helps Frankie navigate through middle-class life without a GPS app. Raising their family in the heart of the country - Orson, Indiana - the two struggle to stretch their patience - and paychecks - around their three crazy but brilliantly true-to-life kids.

Their oldest, Axl (Charlie McDermott - The Office, Frozen River), is an athletic teen whose wardrobe preference is boxer shorts and attitude. Sue is the enthusiastic but socially awkward middle child (Eden Sher - Sons & Daughters, Weeds). She is thrilled to come in eighth (out of eight) in "Square Dancing with the Stars." The youngest, Brick (Atticus Shaffer - Hancock, The Class) is an intelligent but unusual child who loves to read so much, he's the only kid who has his birthday party at the public library.

Created and executive produced by Eileen Heisler and DeAnn Heline (Roseanne, Murphy Brown,How I Met Your Mother) The Middle is produced by Blackie and Blondie Productions in association with Warner Bros. Television.

"The Middle, is a heartwarming and hilarious series that takes a funny but realistic look at what it takes for a typical American middle class family to make it these days," said Rosemary Markson, WHV Vice President, TV and Special Interest Marketing. She added, "We are pleased to offer the second season of this fast growing series to both new and continuing fans."