The Kids Are All Right Movie Review 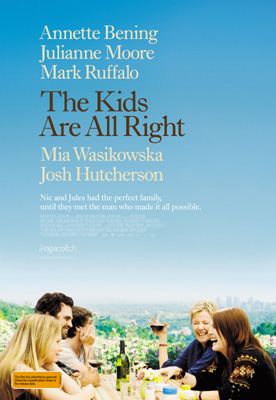 The Kids Are All Right Movie Review

Synopsis: The most talked-about movie at the 2010 Sundance Film Festival, The Kids Are All Right, combines wonderful comedy with warm-hearted emotion in a vibrant and richly drawn portrait of a modern family. The Allgoods share a cozy Southern Californian home, experiencing life's typical ups and downs. The only difference is that this family has two mums.

Jules (Julianne Moore) and Nic (Annette Bening) have been together for years, deeply in love. When their two teenage children decide to seek out their biological sperm donor-dad Paul (Mark Ruffalo), the household will never be the same again. Funny, smart and sexy, this pitch-perfect film features brilliant fantastic performances from its acclaimed cast and The Kids Are All Right is proving to be this year's independent breakout hit.

Verdict: Another gem to watch from Sundance film festival, 'The Kids Are All Right' is a film with a refreshing approach to modern relationships and family life.

Gay married couple Nic and Jules have been living comfortably for a time, their lives are set to change when their daughter Joni (named after songstress Joni Mitchell) and son Laser deicide to seek out their biological father Paul, played by Mark Ruffalo. What unravels is a raw and open depiction of marriage, the film doesn't try to hard to say something and in consequence what it does say is quiet alot.

Annette Bening and Julianne Moore shine as parents: Nic and Jules. Both give very honest performances, which allows the audience an extremely intimate look into the core of their relationships. Bening in particular deserves a special mention as the maybe too controlling, workaholic mother, with a taste for the wine; her scenes are particularly moving. Nic provides a rich contrast to Moore's character Jules who acts as the heart of the family in the impulsive yet eternally sensitive role. Although not a conventional nuclear family, the focus of the film remains firmly on character development and not the nature of their marriage. You learn about the people in this film, which in turn makes their journey human.

'The Kids Are All Right' finds a delicate balance between drama and comedy which proves an enjoyable cinematic experience, much of the comic relief is provided by Joni (Mia Wasikowska, Alice in Wonderland's Australian starlet) and Laser (Josh Hutcherson, child actor all grown up and one to watch in the future) and their encounters with smooth, alternative, organic loving, donor dad Paul and 'Mums' as Joni collectively calls them.

Actors Julianne Moore and Mark Ruffalo reunite since previously working together on 'Blindness' in 2008 and their chemistry is just as memorable. In fact the whole cast give solid performances, some of the best and most insightful scenes occur when all five of them are together.

So it's no surprise that writer and director Lisa Cholodenko's engaging personable style has had the Academy talking and Oscar buzz generating. This is a film with clever themes and tender moments; you might find yourself on verge of tears and launch into laughter. You'll want to savour this bright indie film (that seems almost anti-Hollywood) for its originality and story that isn't all about solving problems but experiencing them.