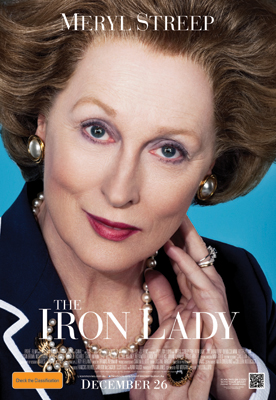 Synopsis: Chester Square, present. An elderly Margaret Thatcher slips past her minders to buy a pint of milk, then returns home to prepare breakfast for Denis, as she has done almost every morning of their married life. They banter gently as she serves him a boiled egg, a comfortable and loving routine.

It's not until Margaret's personal aide, June, bustles in that we see that Margaret sits at the table alone. Denis is alive only in her imagination. Once described in life as always present, never there, Denis is still present for Margaret. But it's a particularly bittersweet day - Margaret has finally agreed to pack away Denis's things, to finally say goodbye.

Signing copies of her memoirs, she hears a distant siren and absentmindedly signs in her maiden name, triggering a childhood memory

The Blitz. Margaret's political awakening, watching her father Alfred, a passionate Tory and local Alderman, speak at a town meeting. Her horror at her mother's fate, relegated to washing teacups in the kitchen whilst the men discuss politics. Her joy at her acceptance into Oxford - an opportunity for escape.

In the present, Margaret begins the work of clearing Denis's clothes, flicking through his racks of dark suits. Her daughter Carol arrives to help and to prepare her mother for a dinner party that night.

As Margaret hosts the dinner, the memory of another dinner party, long ago, springs to her mind.

A young Margaret, masking her trepidation, sits at dinner with local Tory dignitaries, hoping to be selected as a candidate. Faced with their instinctive snobbery and sexism, she holds her own with surprising wit and toughness. A young man, Denis Thatcher, is enchanted. An instant connection - he intuitively understands her.

At the Chester Square dinner, a moment of disorientation is noticed by guests sensitive to Margaret's failing health. She recovers quickly, and is sharp as ever. But later that evening, as Carol helps her undress, concern is palpable, and Carol suggests that Margaret see the doctor the following day. Once Carol has gone, Margaret's thoughts turn again to the past.

In a dusty town hall filled with election flyers and bunting, a young Margaret sits furious after a failed attempt to be elected as a Member of Parliament. A young Denis, funny and kind, finds a novel way to cheer her up, proposing over a dinner of fish and chips.

Now the memories are in full flow…

Her early struggles in the House, her growing profile, driven by conviction and ambition, leaving behind her young children and Denis each day.

Her realisation that she can lead the party and the transformation of her image that follows. Her first triumphant arrival at Downing Street, the first female Prime Minister of Great Britain.

It's the following morning and Margaret visits the doctor. Irritated by his questions, she shows her mettle and blisteringly rejects any idea that she may be feeling confused and disoriented.

Back in Chester Square, the continuing presence of Denis is a stark reminder that her protestations to the doctor were far from the truth. She turns angrily on him, telling him to go away and leave her alone. But as she retires for the night, tired and vulnerable, she's grateful to find him beside her again as the memories return…

Margaret grapples with the pressures of the early months of her leadership as her Cabinet entreats her to back down on her economic policy. She demonstrates her absolute conviction in the face of their wavering. But the pressure continues to build - strikes, civil unrest, the IRA…

Late at night in the Grand Hotel in Brighton, Margaret is finishing work on a speech and Denis is in the bathroom preparing for bed when the hotel room is torn apart by a bomb. A terrifying moment as Margaret fears she has lost Denis…Outside, the shock of injured colleagues, devastation all around.

Woken in the small hours by a phone call from Mark, thoughts of loss, of mothers and sons, trigger memories of the greatest challenge she faced in her premiership…

Argentina has invaded the Falkland Islands, and Margaret is adamant she won't negotiate with a dictator for their return. With complete conviction and in direct opposition to both her Cabinet and world public opinion, including the US, who want to seek a diplomatic solution, Margaret dispatches the Task Force. As the war escalates, she faces the agony of British casualties but refuses to back down. Her darkest hour is finally transformed into her greatest triumph as Britain declares victory.

Now at the height of her popularity, Margaret revels in her power, taking her place among world leaders, a star on the world stage. But her leadership style becomes increasingly autocratic, and as her policies divide the Nation, frustrated Ministers turn against her.

After a humiliating dressing down from Margaret in Cabinet, her long-standing ally, Geoffrey Howe, resigns. It's the beginning of a full-scale rebellion against her in the party ranks. Michael Heseltine announces his intention to challenge her for the leadership of the Conservative Party. Initially Margaret doesn't recognize the threat, and goes to a conference of European leaders in Paris as forces in London gather against her. The scene is set for her downfall and she returns to join the fight too late. As one after another of her Ministers advises that she can't win, she reels at the betrayal. Heartbroken but forced to accept that it's time to go, she makes her final exit from Downing Street.

In Chester Square, Margaret faces the other great loss of her life, the death of her beloved husband. As she contemplates his clothes, his shoes, the accumulated family knick knacks of a life shared, she asks the devastating question 'Were you happy, Denis? Tell me the truth.' It's a question that can never be answered.

Galvanised by the painful thought, she works through the room like a whirlwind, packing his things away. Then Denis appears at her side, in hat and coat. Picking up his newly packed suitcase, he heads for the door. Margaret gives him a final kiss, holding back emotion, staunch. But as he retreats down the hall away from her, she lets out a final cry of grief. She doesn't want to be left alone...

But when she wakes to a new day, with Carol's arrival we sense a change in her. Margaret seems to have found a new resolve to let go of the past and live in the present. 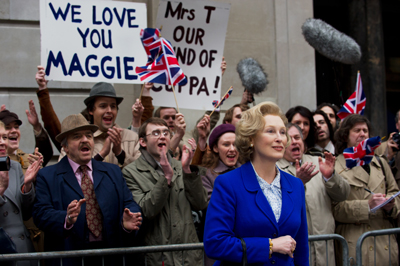 Margaret Thatcher was the first female head of government in the West. She was also the longest serving British Prime Minister of the 20th Century

1925: Born in the town of Grantham, the daughter of a grocer.
1943: Accepted at Oxford University to study Chemistry. President of the student Conservative Association
Late 1940s: Works as a research chemist.
1950: Stands for election to Parliament as Conservative candidate for Dartford - loses the election.
1951: Marries successful businessman, Denis Thatcher.
1953: Qualifies as a barrister.
Gives birth to twins, Carol and Mark.
1959: Stands for election to Parliament as Conservative candidate for Finchley - wins the election and enters the House of Commons.
1970: Appointed Secretary of State for Education & Science by Prime Minister Edward Heath.
1974: Following the Heath Government's defeat at the General Election, announces she is going to run for leader of the Conservative Party.
1975: Elected leader of the Conservative Party.
1976: The Soviet Union dubs her 'The Iron Lady' for her staunch opposition to Communism.
1979: Leads the Conservative Party to victory in the General Election and becomes the country's first female Prime Minister.
Airey Neave, Secretary of State for Northern Ireland and her close friend and advisor, is killed by car bomb planted by the Irish National Liberation Army (INLA)
1980: Pursues a policy of spending cuts notwithstanding recession and high unemployment.
1981: Riots in the UK.
Provisional IRA and INLA prisoners commence hunger strike in the Maze Prison.
Travels to the US to meet President Ronald Reagan, establishing an enduring personal bond based on shared beliefs.
1982: Argentina invades the Falklands Islands (a British Overseas Territory) leading to war in April. Argentina is defeated and the Falklands are back under British control by June.
1983: Wins a landslide in the General Election for a second term as Prime Minister.
1984: Survives an attempted assassination when the Brighton Grand Hotel is bombed by the Provisional IRA during the Conservative Party Conference.
Start of the year-long miners' strike against coal pit closures, ending with the defeat of the Miners' Union.
Recognises Mikhail Gorbachev as a man the West "can do business with"
1986: "Big Bang" financial deregulation of the City fuels an economic boom.
1987: Wins the General Election for a third term as Prime Minister.
1989: Fall of the Berlin Wall.
1990: Introduces the "Poll Tax" (a tax per person based on valuation of the property each inhabits, rather than that individual's income) and opposes closer integration with Europe, causing deep divisions within the Conservative Party.
Civil unrest including the Poll Tax Riot.
Geoffrey Howe, a former key ally, resigns and precipitates a challenge to her leadership of the Conservative Party.
Rather than campaign for her leadership, travels to Paris for a conference of government heads.
With support falling away, resigns as Prime Minister and leaves 10 Downing Street.
1992: Takes her seat in the House of Lords as Baroness Thatcher.
2002: After a series of minor strokes, announces an end to her public speaking engagements
2003: Death of Denis Thatcher
Present Day: Lives quietly in London, making occasional public appearances.