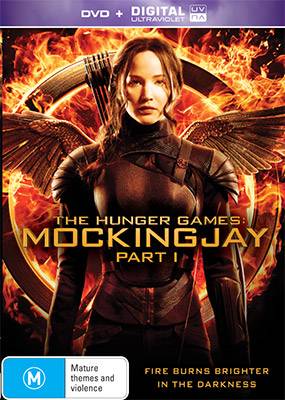 The courage of one will change the world

The Hunger Games: Mockingjay - Part 1, finds Katniss Everdeen (Jennifer Lawrence) in District 13 after she literally shatters the games forever.  Under the leadership of President Coin and the advice of her trusted friends, Katniss spreads her wings as she fights to save Peeta and a nation moved by her courage.

The story accelerates to new, exhilarating levels as the futuristic chronicle of Katniss Everdeen enters into a new realm. The Games may have been obliterated for good, but the fight to survive is about to intensify. Faced with the most daunting odds - and watched by the eyes of a hopeful nation - Katniss must put into motion courage, strength and empowerment against the all-powerful Capitol. This is the moment when she realizes she has no choice but to open her wings and fully embody the Mockingjay symbol. If only to save Peeta, she must become a leader.