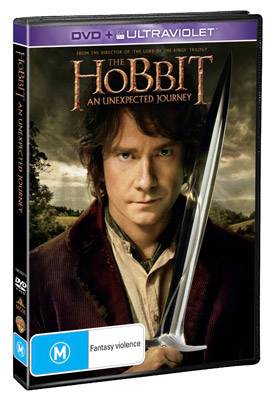 The first of a trilogy of films adapted from the enduringly popular J.R.R. Tolkien masterpiece, The Hobbit: An Unexpected Journey, which is nominated for three Academy Awards, is an epic adventure that immerses audiences once again in the fantastical world of Middle-earth.

Set 60 years before The Lord of the Rings, the adventure follows our hero Bilbo Baggins, the eponymous Hobbit, who is reluctantly swept into an epic quest to reclaim the lost Dwarf Kingdom of Erebor from the fearsome Dragon Smaug. Approached out of the blue by the Wizard Gandalf, Bilbo finds himself press ganged into the company of thirteen Dwarves led by the legendary warrior Thorin Oakenshield and on a journey into the wild. Together they must traverse troll infested forests and goblin lairs, hunted by a merciless white Orc and haunted by a mysterious and sinister figure known only as The Necromancer.

The Hobbit: An Unexpected Journey, set to launch on DVD and Blu-ray™ in Australia from May 1st, will be Warner Bros. Home Entertainment's first title in Australia and New Zealand to be released with UltraViolet.

UltraViolet is an all-new way to collect, access and enjoy your movies and TV shows. It allows consumers to access their digital library from the cloud, instantly streaming or downloading their movies on a wide variety of devices including PC, Mac, Android and iOS. Its purpose is to enhance the consumer experience of digital movie ownership through added flexibility (multiple platforms), portability (take all your movies with you) and safety/security.

All The Hobbit: An Unexpected Journey Blu-rays and DVDs will be specially marked as including UltraViolet. Look out for the purple UltraViolet band across the top of the packaging, the stickers on the front and UltraViolet information printed on the rear of the packaging. Future titles that include UltraViolet will be marked in a similar fashion.

Each of these specially marked DVDs and Blu-rays will include a free UltraViolet code displayed on a leaflet that will be enclosed within the packaging. The code can then be redeemed online through UltraViolet portals such as Flixster.com.

On May 1st, when The Hobbit: An Unexpected Journey launches on DVD and Blu-ray, Flixster will be one of a few UltraViolet (www.Flixster.com) portals available to consumers in Australia and New Zealand. There will be a number of other UltraViolet portals launching throughout 2013.

Once the customer is in their Flixster account they enter their redemption code on the leaflet.

The Hobbit: An Unexpected Journey will then be added to the customer's UltraViolet account or 'locker". This means that the UltraViolet Cloud identifies that the customer owns the title and will make it available to them wherever they are – allowing them to stream it on their PC, Mac, Android or iOS device or download and store it in the Flixster app (available on Android and iOS devices) for offline viewing.

The Hobbit: An Unexpected Journey is Warner Bros Home Entertainment's first release with UltraViolet in Australia and New Zealand but there are already plans include UltraViolet across upcoming releases such Cloud Atlas and Jack The Giant Slayer as well as Television and Children's titles.

UltraViolet has been available in the USA since October 2011. There are currently nearly 9,000 movies and television titles available with UltraViolet in the US, from studios such as Warner Bros, Fox Entertainment Group, Lionsgate, NBC Universal, Paramount Pictures and Sony Corp and more than 11 million UltraViolet accounts have already been created worldwide.

Roger Clarke, Managing Director of Warner Bros Home Entertainment Group says, 'UltraViolet is a fantastic consumer proposition and a key initiative for us moving forward. The Hobbit: An Unexpected Journey is the perfect title to be launching with in Australia and New Zealand and we are already looking ahead to adding UltraViolet to all our major releases this year".