Synopsis:
In the 3D action-comedy The Green Hornet, Britt Reid (Seth Rogen) is the son of LA's most prominent and respected media magnate and perfectly happy to maintain a directionless existence on the party scene - until his father (Tom Wilkinson) mysteriously dies, leaving Britt his vast media empire. Striking an unlikely friendship with one of his father's more industrious and inventive employees, Kato (Jay Chou), they see their chance to do something meaningful for the first time in their lives: fight crime. But in order to do this, they decide to become criminals themselves - protecting the law by breaking it, Britt becomes the vigilante The Green Hornet as he and Kato hit the streets.

Using all his ingenuity and skill, Kato builds the ultimate in advanced retro weaponry, The Black Beauty, an indestructible car equal parts firepower and horsepower. Rolling in a mobile fortress on wheels and striking the bad guys with Kato's clever gadgets, The Green Hornet and Kato quickly start making a name for themselves, and with the help of Britt's new secretary, Lenore Case (Cameron Diaz), they begin hunting down the man who controls LA's gritty underworld: Benjamin Chudnofsky (Christoph Waltz). But Chudnofsky has plans of his own: to swat down The Green Hornet once and for all.

Review: Brit Reid is born to protect people from bullying. But after his father crushes his dreams he turns to a life of excess and meaningless partying. But when his father dies, Brit discovers a talented but under appreciated employee - Kato, who changes Brit's world when he shows him his gadget creations. After a prank that goes horribly wrong, a new life direction and partnership is born. Brit uses his influence to slingshot The Green Hornet into the spotlight, but in doing so puts his own life in danger. The unprepared heroes look for guideance from Brit's unsuspecting new secretary, Lenore Case (Cameron Diaz), who unwillingly becomes the mastermind of a series of events that turn the city & crime world to chaos. But The Green Hornet is not like other super heroes, he pretends to be bad while really he's saving people. And with all the focus on The Green Hornet, the real Hero - sidekick Kato is able to save the day.

The Green Hornet is clever, hilarous and completely entertaining. Using Seth Rogen's unique stamp on this film has made this cartoon remark more than worth while, but a complete gas!


ABOUT "THE GREEN HORNET"

The Green Hornet made his debut on January 31, 1936 on WXYZ Detroit, the creation of the station's George W. Trendle, who also created the Lone Ranger (in fact, in mythology of the radio character, Britt Reid is the great-nephew of the Lone Ranger, John Reid). The series, which ran until 1952 on the Mutual and NBC Blue networks, followed the adventures of Britt Reid, a bored playboy whose life changes when he inherits his father's crusading newspaper, The Daily Sentinel. He saves the life of Kato, a man with incredible technical and martial-arts skills. Kato becomes Britt's closest ally and transforms Britt's car into the Black Beauty, giving them an edge as they search for evidence to expose the city's underworld in the newspaper. When Britt and Kato witness a brutal mob hit, Britt invents his secret identity.

Following its successful run on radio, the Green Hornet ran in several comic books. In 1966, the character made the jump to the small screen for one season on the ABC television network, starring Van Williams as the Green Hornet and catapulting Bruce Lee, who played Kato, to stardom. 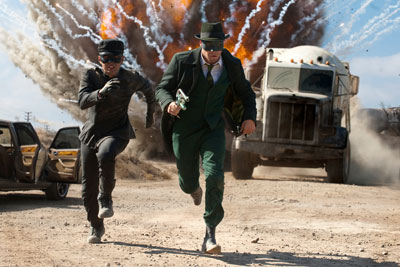