The Flash: The Complete First Season 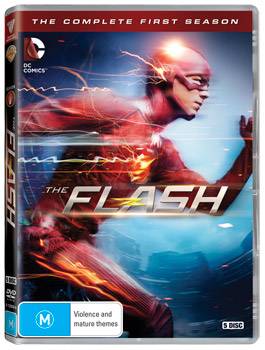 From the Arrow creative team, The Flash is a fast-paced super hero drama that follows the high-speed adventures of the Fastest Man Alive. The action drama follows Central City Police scientist Barry Allen, an everyday guy with the heart of a hero and the genuine desire to help others. Standing still emotionally since the day his mother was murdered (and his father unjustly jailed for the crime), Barry was taken in as a child by the investigating Detective West and raised in a cop's home alongside West's supersmart daughter (and Barry's dream girl) Iris. But when an unexpected and devastating accident at the S.T.A.R. Labs Particle Accelerator facility strikes Barry, he finds himself suddenly charged with the incredible power to move at super speeds. While Barry has always been a hero in his soul, his newfound powers have finally given him the ability to act like one. With the help of the research team at S.T.A.R. Labs - including billionaire visionary Harrison Wells, biogenetics expert Caitlin Snow and the eternally upbeat Cisco Ramon – Barry begins testing the limits of his evolving powers and using them to help the people of Central City and stop the rogues' gallery of villains – many of whom have also been altered by the particle accelerator explosion.

With a winning personality and a smile on his face, Barry Allen – aka The Flash – is finally moving forward in life ... very, very fast