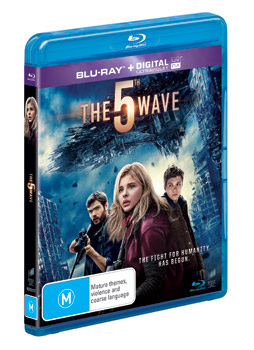 Chloë Grace Moretz (Kick-Ass, The Equalizer) stars in the action-packed, sci-fi drama The 5TH Wave, debuting on Blu-ray™ and DVD with UltraViolet™ from April 14, 2016. Based on the best-selling novel by Rick Yancey, The 5TH Wave follows Cassie (Moretz), a girl on a mission to rescue her younger brother amidst alien attacks that threaten to decimate the planet. Also starring Nick Robinson (Jurassic World, The End of Summer), Ron Livingston (The Conjouring, Office Space), Maggie Siff (Sons of Anarchy, Mad Men), Alex Roe (The Calling, Sniper: Legacy), Maria Bello (Third Person, Prisoners), Maika Monroe (The Bling Rign, Labor Day) and Liev Schreiber (X-Men Origins: Wolverine, Ray Donovan) The 5th Wave is a stark reminder that when all 21st century advancements are taken away, we are left with nothing but the human connection.

Four waves of increasingly deadly alien attacks have left most of Earth's surface annihilated. Against a backdrop of fear and distrust, Cassie is on the run desperately trying to salvage any shred of hope for survival. As she prepares for the inevitable and lethal fifth wave, Cassie teams up with young man, Evan Walker (Roe) who may become her final hope - if she can only trust him.

Be a part of the ultimate fight for humanity where all seems lost but a romantic bond that can still grow and flourish in an apocalyptic world. The 5th Wave is available to own on DVD and Blu-ray™ with UltraViolet™ from April 14, 2016.