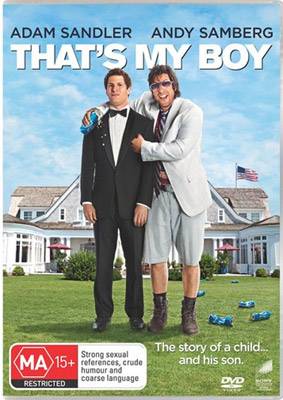 Welcome to the world of Donny - the world's worst dad. As a 12 year old school boy, Donny never thought hooking up with his hot teacher would result in him becoming a single parent before he was even a teenager. However, when his older lover is incarcerated for corrupting a minor, Donny is left holding the baby. Raising their son Todd alone, Donny becomes a national celebrity and the most misguided parent ever.

Fast-forward several years and Donny finds himself down and out and estranged from Todd for almost a decade. After years of separation, Todd's world comes crashing down on the eve of his wedding when an uninvited Donny suddenly shows up, looking for financial help from his now wealthy son.

Gate-crashing the civilised world of Todd and his fiancée, Jamie, Donny unleashes his own outrageous form of parenting on his son and his soon to be in-laws, with hilarious and disgusting results.

Featuring the comic talents of Saturday Night Live regular Andy Samberg, plus incredible cameos from a cavalcade of stars including Vanilla Ice, Susan Sarandon and James Caan. Get ready to laugh out loud at some of the biggest gross-out moments in film histoy.

Blu-ray Special Features:
* Classy Rick's Bacon and Leggs featurette
* Who Are All These People? featurette
* Greetings from Cape Code featurette