I wanted something super fresh but also with a kind of 90's pop/hip-hop sensibility. Lyrically, the track is about the unreliability of comparing your life success to who you see and follow on social media. Don't let someone you don't even know make you unsatisfied with who you are because there is a good chance that what you're seeing online isn't real. You just don't know what's going on behind the scenes. You don't have to be perfect. Just Do You.. Tessa T

The Spice Girls, The Fugees, TLC, Shania Twain, Natalie Imbruglia, Mariah Carey, The Cardigans…. Tessa Thames' Dad ran a karaoke business in the 90's where she operated as a 'warm up of sorts', taking the mic first with the hopes of encouraging others to follow suit., It was a delicate balancing act: being good enough to entertain whilst trying not to intimate punters. Through this, Tessa cultivated her love of music and song, writing, absorbing her dearly held 'Top of the Pops' 90's nostalgia like a sponge. Now she is squeezing it all out as something of her own.

Now Tessa Thames unleashes her modern 90's nostalgic pop on the world without any concern for whom might be intimidated.

Tessa Thames: Bedroom-Pop that goes ahead and blows the windows out. I really wanted something super fresh but also with a kind of 90's pop/hip-hop sensibility.


Question: Can you tell us about 50K Carat?

Tessa Thames: Lyrically, the track is about the unreliability of comparing your life success to who you see and follow on social media. Don't let someone you don't even know make you unsatisfied with who you are because there is a good chance that what you're seeing online isn't real. You just don't know what's going on behind the scenes. You don't have to be perfect.

Tessa Thames: Mostly I just want my listeners to have a good time! Enjoy your life and don't take this time you have for granted. Get creative. Have fun. Do you!


Question: What made you decide to go solo?

Tessa Thames: After being in a Folk Duo 'Microwave Jenny' with my husband for so long, I really wanted to mix it up a bit. I have so many ideas that just don't fit in that acoustic vibes folk music nest and going solo was the perfect way to be able to let loose and dig into some of that 90's nostalgia that I love so much!

Tessa Thames: Live performance and recording for me are like opposite ends of the spectrum! But I love them both equally. If anything I get more nervous in the studio than I do live performing. I think the intimacy of recording in a studio makes me nervous, I can hear my own thoughts too clearly hehe in saying that it's a pretty special experience. Live performance is this whole other level where all my thoughts go out the window and I can just do what I love! 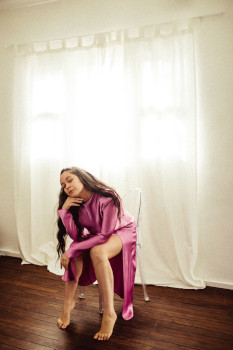 Tessa Thames: It's such early days for Tessa Thames and this year has been so crazy that I haven't really been able to form a favourite for live performance yet but I'm really looking forward to performing my newest single '50K CARAT" It has such a cool vibe and it just unlike anything else I have performed before.

Tessa Thames: The thought of being able to perform pretty much anything live is enough motivation for me!

Tessa Thames: My dad always loved to hear me sing starting from when I was in primary school probably. He ran a Karaoke business so I would always be having a sing song, he would always say "LOUDER LOUDER". I think this is what sparked my initial love of performing.

Tessa Thames: I'm not going to lie, throwing in the towel is pretty much a regular occurrence in this o'll brain of mine. But I never actually will, cause that's like saying "oh I'm never going to breath again" that would just be silly.

Tessa Thames: It would be hard to choose just one favourite part about becoming an artist. The one that's come to me first though is the awesome, crazy, weird, whacky and incredible people I have met along the way. Lots of whom I still try to keep in contact with whether they are fans or colleagues or like the random person I met in the bathroom at an awards night.

Tessa Thames: HAHA! No one day is the same with a 5 year old! But on days she is at school I'll enjoy a nice slow breaky. Throw the ball to our dog so she doesn't feel neglected. Write back to all my emails. Basically try finishing everything I've ever started in my life. Pick up my daughter and maybe go for a swim at the beach before sunset. You'll usually find me in the home studio around midnight putting down new tracks and working on new music as this is when it's most quiet. REPEAT.

Tessa Thames: More songs and then a real big sleep.