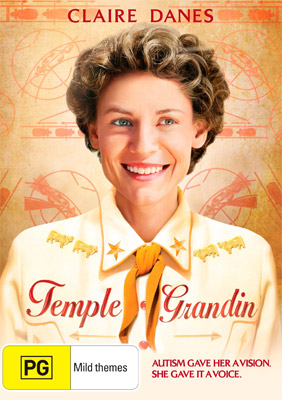 Golden Globe® winner Claire Danes gives a triumphant and memorable performance as Temple Grandin, an autistic young woman who became one of American's most remarkable success stories. No ordinary biopic, HBO Films' Temple Grandin tackles the life story of an extraordinary human being who went on to become a scientist, best-selling author and groundbreaking animal advocate despite the challenges of autism.

The film chronicles Dr. Temple Grandin's early diagnoses, her turbulent growth and development, the enduring support she received from her mother, aunt and science teacher; and her emergence as a highly-functional and esteemed scientist whose innate sensitively and understanding of animal behaviour led her to revolutionise the cattle industry. To try to help viewers understand autism, the visually inventive film goes beyond Temple Grandin's words, taking audiences inside her mind via a series of snapshot images that trace her self-perceptions, allowing insight into how an autistic person processes the world around them.