Making an impressive feature directorial debut, Israeli filmmaker Tatia Rosenthal has made a stop motion animated feature that is unique and profound, made up of multiple narrative threads, and a myriad of characters attempting to tackle their respective problems in life through the eyes of characters living in an apartment block.

We have a family of three, with Jim who might just need his karma checked for encountering really antagonizing moments involving death, and his two sons Dave (Samuel Johnson) and Lenny (Ben Mendelsohn), the former being unemployed and is found to be central to the narrative, and the latter being a Repo-man finding himself falling, and obsessing over the love by new neighbour and supermodel Tanita (Leeanna Walsman), who has a fetish for a hairless body. Then there's a lonely old man [Barry Otto] who finds the world constantly passing him by with nobody interested in hearing him talk a bit finding a companion in an angel, whom he asks incessantly about Heaven. Then there's a boy who has a friend in his piggy bank, and a couple on the verge of being married having to fall out because one of them refuses to grow up. $9.99 is based on the short stories of Etgar Keret, one of the leading voices in Israeli contemporary literature. The film is the first Israeli-Australia coproduction, and the film has been getting quite the buzz for its originality. Rosenthal talked exclusively to Paul Fischer.


QUESTION: It seems that the animation industry in Australia is doing rather well at the moment. And in the space of one year, we have two very interesting animated films, both of which I've seen - yours, and Mary and Max. Why do you think that is? 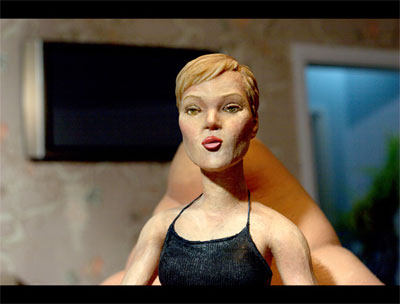 TATIA ROSENTHAL: You know, it's funny. I get the same question, but as referenced to animated features that came out of Israel as well this year, along with Waltz with Bashir, $9.99, and - I think specifically for the two countries, it's probably coincidental. But I think globally, because the means of production have become a little more affordable and more desk-top-y, that more animators and filmmakers worldwide are able to bring the costs down to make independent animated work. I think the fact that two of them came out of Israel and two out of Israel is more coincidental.


QUESTION: This is a film that does offer a kind of a microcosm, I suppose, and the human condition. And I was wondering how this story developed.

TATIA ROSENTHAL: The script is based on six short stories of Etgar Keret's, and the script was co-written with him. And we've been working on getting this financed. It was seven years before it got picked up. So really, the themes are all from the short stories, and very much from the world of Etgar. And for me, directing them in stop-motion really creates a complementary world to his intellectual world, in that physical sense.


QUESTION: Was stop-motion the only form of animation that you wanted to - that you were interested in, in making this?

TATIA ROSENTHAL: Absolutely. If animated, definitely only stop-motion. There had been a brief period where we considered live action, but that got dismissed quite quickly. 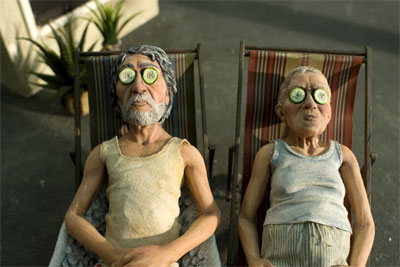 TATIA ROSENTHAL: Almost. I think that - absolutely, five years ago would have been far harder, and more expensive. And then the week we finished - literally the week we finished, Canon came out with a camera that would have greatly simplified one of our major processes. So, now it's even easier, if anybody were to start now. Technology's really moving exponentially on this. And - you know, sometimes specifically to accommodate stop-motion, and sometimes just generally, and stop-motion people find a way to use it.


QUESTION: What was the casting process like for this? It's great that you managed to get some really terrific Australian actors to voice these characters. And obviously you paid them so much money to do it. First of all, why the decision to do the film in Australia? Was it always your intent? And why this particular cast?

TATIA ROSENTHAL: The film ended up being made in Australia because the producer Emile Sherman, who produced Candy, with Geoffrey Rush as well, wanted to make the first ever Israeli-Australian film production, and he was looking for the right material, and met with Etgar Keret in Israel, because he got recommended to him by two writers that Emile worked with before. And we'd pretty much reached a dead end in financing it in the States, because we were asked to make it for under $1 million, which was impossible. And once it became a film that was made outside of the States, government money becomes available, and the decision where it gets made is a little less financially-based. So, once Emile was on board, Etgar introduced them to Amir Harel, who is his producer on Jellyfish. And the two financed the film practically in no time, compared to what we'd been through for seven years before that. 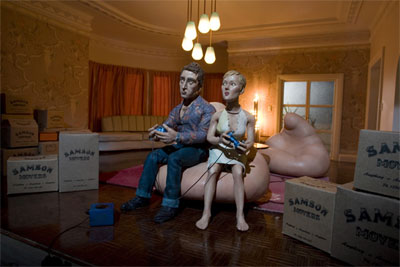 QUESTION: What surprised you the most about working in Australia on this?

TATIA ROSENTHAL: I don't know that I had any specific expectations to be honest, it having been my first feature.


QUESTION: Was it challenging for you to find the right actors? And how did you hit upon this particular -

TATIA ROSENTHAL: That was a dream. The casting process was a dream. Nikki Barrett, our casting agent, is incredibly sensitive. And both her and Emile had access to everyone, really. And we pretty much got our first choice for every part.


QUESTION: With stop-motion animation, do you work the same way as other animated films? You do a lot of series of recording sessions first, and then -


QUESTION: How much did the actors know about the characters, visually?

TATIA ROSENTHAL: Not much at all. We were not ready to show them, at that point. They only know the general descriptions from the script.


QUESTION: I know that - obviously they had a lot more money to work with, but when actors work on a Pixar movie in the States, for example, or these bigger animated films, they get a lot of very clear visual ideas of what the characters are going to look like, which presumably help to reflect their performances. 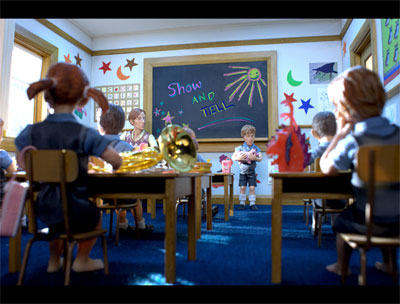 
QUESTION: How were you able to direct their vocal performances, if they were unclear about what their characters looked like?

TATIA ROSENTHAL: Well, I think, actually, because $9.99 is much more of a straight drama, in comparison to a Pixar movie, it could also be played like a straight drama. And actors didn't really need to rely on the looks of the characters. Meaning, if they happened to - if was a live action shoot, and they happened to play the part, they would play it in their own bodies, you know? And they would cast the appropriate age range, definitely. So from there, it was really just like directing drama.


QUESTION: I love the fact that you managed to get Tony LaPaglia to be in this.


QUESTION: Was he in Australia recording? Or did he record his stuff from here?

TATIA ROSENTHAL: No, him and Geoffrey Rush were in LA, and we did it over the Internet.


QUESTION: Which is astonishing to me, that you can actually get these voices - record these voices on-line now. I mean - 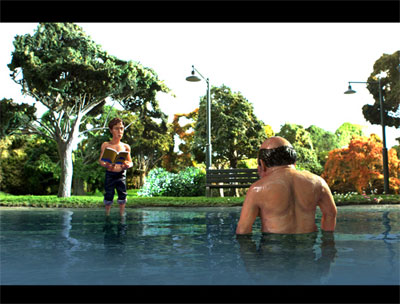 
QUESTION: How grateful are you that there is now an Academy Award category for animation? And do you think that the time will come when much more serious animated films, such as $9.99, will get recognized?


TATIA ROSENTHAL: Very grateful. And I think - you know, Persepolis was nominated. And Waltz of Bashir was nominated. Granted, not in the animation category. But still, I think you have a trickling of recognition.


QUESTION: What do you hope American audiences are going to get out of this film? Because I know that - I mean, do you see the themes of this film as being broadly universal?


QUESTION: Are you planning on doing another animated film? Or do you want to - 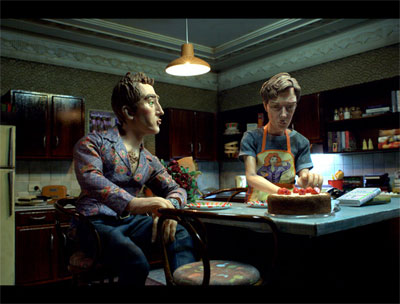 TATIA ROSENTHAL: I would love to, just to implement the lessons of the first ones. And - you know, the learning curve.


QUESTION: What lessons would they be?

TATIA ROSENTHAL: You know - I guess "lesson" is the wrong word. But, the learning curve of how to direct an animated stop-motion feature. There's a lot to be learned. And I would just like to start one at the point where I ended this last one.


QUESTION: What are you planning on working on? Or, what are you doing at the moment?

TATIA ROSENTHAL: I've optioned a children's book, and I'm in very early conversations about other projects. And I didn't know what would happen first, a live action, or another stop-motion. But I'm definitely looking at both.


QUESTION: Oh, so a live-action film could be in the cards.

TATIA ROSENTHAL: Oh, I hope so. Yeah. There's a lot to be learned from directing animation into live action, because you work with absolutely no coverage.


QUESTION: Are you looking at shooting a film in the States? In Israel? Australia?

TATIA ROSENTHAL: It'd be great to stay home in the States for a while. Preferably New York!

Based on the Short Stories of Etgar Keret, $9.99 is a stop motion animated feature which offers slightly less than $10 worth about the meaning of life.

Have you ever wondered "What is the meaning of life? Why do we exist?" The answer to this vexing question is now within your reach! You'll find it in a small yet amazing booklet, which will explain, in easy to follow, simple terms your reason for being! The booklet, printed on the finest paper, contains illuminating, exquisite color pictures, and could be yours for a mere $9.99.

This is the ad that alters the life of the unemployed 28 year old who still lives at home, Dave Peck. In his struggle to share his find with the world, Daveˇ¦s surreal path crosses with those of his unusual neighbors: an old man and his disgruntled guardian angel, a magician in debt, a bewitching woman who likes her men extra smooth, a brokenhearted man who befriends a group of hard partying two inch tall students, and a little boy who sets his piggy bank free. Their stories are woven together, examining the post-modern meaning of hope.