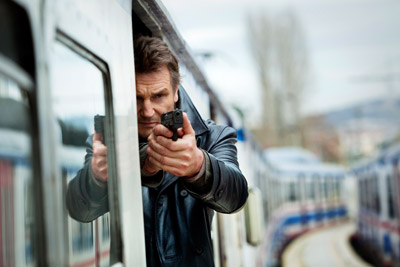 Synopsis: Liam Neeson returns as Bryan Mills, the retired CIA agent with a "particular set of skills" who stopped at nothing to save his daughter Kim from kidnappers. When the father of one of the villains Bryan killed swears revenge, and takes Bryan and his wife hostage in Istanbul, Bryan enlists Kim to help them escape. Bryan then employs his unique tactics to get his family to safety and systematically take out the kidnappers, one by one.

Verdict: Once again, Taken 2, hits all the right cords in suspense, thriller and unexpectedness. With a twist on the original, Taken 2 nails the thriller genre and gives you that sick feeling, in the stomach, for weeks after the credits roll and every time you board a plane...

As soon as we hear "Listen to me very carefully Kim your mother and I are going to be taken and the people are going to come for you too" we know that we are in for an action packed, electrifying adventure lead by retired CIA agent Bryan and his daughter, Kim. Using his "particular set of skills" Bryan is able to lead his daughter on a chase to save him however that's only the beginning...

With several humorous comments from the credible protagonist, Liam Neeson, mixed with seriously violent ass-kicking scenes, audiences who loved the original can be guaranteed to enjoy Taken 2.
Rating: *****