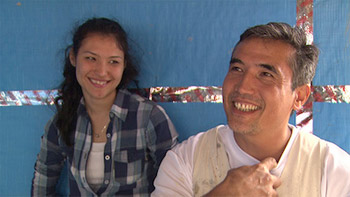 Synopsis: Freedom Stories is an exploration by filmmaker Steve Thomas of the achievements and struggles of former -boat people'.

Now Australian citizens, they arrived seeking asylum from the Middle‐East around 2001 – a watershed year in Australian politics sparked by the Tampa affair and Prime Minister John Howard's declaration: 'We will decide who comes to this country and the circumstances in which they come".

Some were only children when they found themselves in indefinite mandatory detention in remote places such as Woomera or Nauru and then placed on temporary protection visas, which extended their limbo for years. It has taken astonishing resilience and over a decade for them to build secure lives and start contributing to their new country.

These are ordinary people who found themselves caught up in the extraordinary consequences of political brinkmanship but have long since dropped out of the media spotlight. They live among us now and given the Government's boast that it has -stopped the boats' it is time for their voices to be heard.

I first began meeting asylum seekers while making -Welcome to Woomera' (2002). I got to know detainees from the Woomera Detention Centre who were then in community detention but -for their own protection' the Immigration Department would not allow them to tell their stories on film.

My next film -Hope' (2008) featured the late Amal Basry, who survived the SIEV X people smuggling disaster in 2001 only to die from cancer five years later in Melbourne. Amal refused to be silenced about her experiences and in travelling around Australia with the film I met more former asylum seekers, who had all been through the experience of Australia's unique system of indefinite mandatory detention followed by Temporary Protection Visas (TPVs were abolished in 2007 but recently reinstated).

I decided to collaborate with some of these people in telling positive stories about their contributions as new Australian citizens to our society. Rather than making a -political' film I simply wanted to introduce former asylum seekers to audiences that may never have met a -boat person', because my experience was completely counter to the negative labelling and scapegoating that predominates in the -refugee debate'.

As I embarked on this journey I soon realised that for many it had taken the bener part of a decade to get their lives back on track and to start achieving something. To reap the benefit of hindsight I decided to work with participants who arrived in detention around 2001 – the controversial period of the Tampa, the -children overboard' affair and the Howard Government's -Pacific solution'.

My starting point for filming was -what these people are doing now' but as I got to know them it became apparent that in one way or another most remain deeply affected by their experiences of the double -limbo' of detention and TPVs. I was struck by the direct correlation between the psychological damage done and the Sme spent in detention and on TPVs, as well as age on arrival. So this became a film not just about our shared humanity and the enthusiasm and resilience of people compelled to seek a new home, but about how they are facing past traumas for which we all share some responsibility.

Freedom Stories features a dozen participants from a range of Middle‐Eastern backgrounds and living across four states, some of whom were children when they arrived. They spent between several months and several years in detention and most spent several years on TPVs. In fact we filmed with closer to twenty people and those not included in the feature doc will have short profile films of their own. Each has a story and with the Federal Government claiming to have -stopped the boats' it is time those stories were heard.

Shafiq Monis is a house painter and visual artist. He spent the year 2000 in the Woomera Detention Centre after escaping from a Taliban jail and then 4 years on a Temporary Protection Visa (TPV). He was separated from his family for 10 years before they were reunited in Melbourne. His daughter Mahidya is at University studying media and journalism.

Mustafa Jawadi is a motor mechanic in Canberra. He was 10 when the boat he and his family were on caught fire, with the loss of two lives. After being rescued by the navy the family were detained on Nauru for 3 years, where his younger brother Amir was born. Mustafa is now engaged to be married.

Alana Elias is a primary school teacher with a special interest in using technology in the classroom. After fleeing Iraq in 2000 she and her family found themselves in the Port Hedland Detention Centre and then on TPVs. She lives in Melbourne and has recently completed a Masters in Education.

Arif Fayazi started work in Australia employing his tiling skills from Afghanistan, before establishing his own construction company in Melbourne. He spent 10 months in the Woomera Detention Centre and 6 years on a TPV before his wife and son were able to join him. He has a young son born here and works long hours to support his family.

Sheri Shoari is a single mother with three sons, including Ali who has cerebral palsy. After arriving from Iran they spent 3 years in the Curtain and Baxter Detention Centres before settling in Adelaide. Sheri's youngest son, Hamid, was 10 when he arrived in detention and joined the Australian armed forces at 16, while the oldest, Mohammad, was 14. He works in a factory and is a keen student of philosophy.

Jamila Ahmadi was 7 years old when she and her family arrived from Afghanistan in 2001. They were detained in the Woomera Detention Centre and then spent 3 years on TPVs. Today she is doing a double degree in International and Development Studies at the University of Adelaide, as well as working and participating in various youth activities.

Amir Javan was a jeweller in Iran and now works in the real estate business in North Sydney. He spent more than 4 years in the Curtin and Baxter Detention Centres and finally won freedom after his case went all the way to the High Court.

Parviz Avesta is also from Iran. He is married, runs his own tiling business and as a teenager in detention struck up a friendship with Amir that continues today.

Reyhana Akhy is a case officer at the Migrant Resource Centre in Adelaide, where she assists in settling newly arrived refugees. She and her family were detained in the Woomera Detention Centre in 2001 at the height of the riots there and then placed on TPVs. Her daughter Mariam was 8 when she arrived and is currently studying Criminology at University.