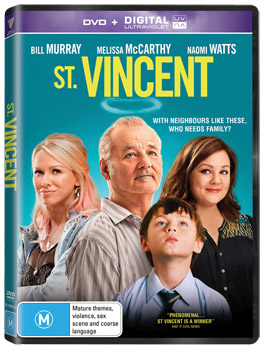 Vincent is no saint - he's a hard-drinking, foul-mouthed, cranky degenerate with no money, no friends, no tolerance and a mountain of gambling debts. Only Bill Murray could make a cantakerous character like Vincent loveable. But Vincent is about to meet his match... single mother Maggie has just moved in next door with her 12-year-old son, Oliver.

Forced to work long hours, Maggie has no choice but to leave Oliver in the care of their new neighbour Vincent. An odd friendship soon bloosoms between the improbvable pair. Together with Daka, a pregant, wise-cracking Russian 'Lady of the Night' Vincent simply brings Oliver along on his daily routine - the race track, a strip club and the local dive bar. Vincent helps Oliver grow to become a man, while Oliver begins to see in Vincent something that no one else is able to: a misunderstood man with a heart of gold.