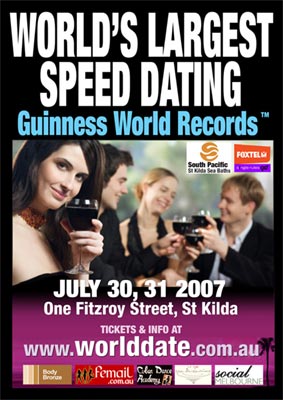 The official Guiness World Records attempt for the Worlds Largest Speed Dating will be held by World Date at One Fitzroy Street in St. Kilda on July 30 and 31.

This exciting event features up to 100 eligible professional males and females in 2 age brackets meeting each other during this world-first marathon plus $6000 of prizes and everyone receives a $100 voucher for the luxurious St Kilda Sea Baths/Spa/Gym. Foxtel will also feature segments on its show "Singles Rule".

The dramatic rise in popularity of speed dating Is attributed to a modern hectic lifestyle, longer working hours and the disappearance of traditional ways of meeting.

There is growing dissatisfaction with the superficial bar scene. Internet dating often takes weeks of emailing only to find face to face that the 'real' person is totally different to expectations.

Major events organiser, Ian White, has a history of gala events for up to 2000 professional singles a night in Melbourne and Sweden and has run events for the largest internet dating site in Australia.

Japan, like Australia, is entering an ageing population crisis with over 2000 schools closed in the last decade. In fact the Japanese Goverment pays for speed dating. Peter Costello has emphasised our own Impending crisis.

World Date is fast, fun and rejection-free. This novel scheme took off in America and has even featured in an episode of the hit US comedy 'Sex and the City'.

So what can you learn about someone in a few minutes? Ian's website shows University Research revealing most people predict the long-term suitability of a partner within those first few minutes. Many act on this Initial Impulse.

Patrons of this landmark event will get South Pacific Gym memberships, Salsa dancing courses plus hair and beauty products. Future world-first events include 100 dates in 100 minutes.

All details are at www.worlddate.com.au