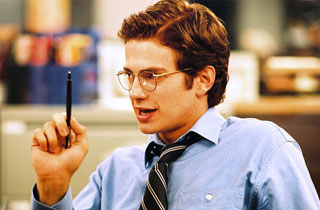 
He'd Do Anything To Get A Great Story

Synopsis:
In Shattered Glass, Hayden Christensen stars as Stephen Glass, a staff writer for the respected current events and policy magazine The New Republic and a freelance feature writer for publications such as Rolling Stone, Harper's and George. By the mid-90's, Glass' articles had turned him into one of the most sought-after young journalists in Washington, but a bizarre chain of events - chronicled in Buzz Bissinger's September 1998 Vanity Fair article on which Shattered Glass is based - suddenly stopped his career in its tracks. Shattered Glass is a study of a very talented - and at the same time very flawed - character. It is also a look inside our culture's noblest profession, one that protects our most precious freedoms by revealing the truth, and what happens when our trust in that profession is called into question.


My Verdict:
Shattered Glass is a great story even more so in that it is based on real events. Step by step we watch as Stephen Glass digs himself deeper and deeper into a pit of lies, believing them all to be true. Hayden Christensen has such a young naïve face that is perfect for the role of Stephen. Even when faced his lies, Stephen continues to add to them, firmly believing that he is being victimised, that he is innocent and you can't help but feel sorry for him, such is his conviction. But it was all in vain as he was fired from his job after just too many lies surfaced in one article in particular titled "Hack Heaven".

Stephen Glass was a charmer and duped many of his co-workers, most did not want to believe that they had been caught by such a young impressive character. After all, he was the one who was the most entertaining at their meetings and was great at pitching a story to the editor. He endeared himself to those around him by remembering the little things about them - what gum they liked, buying them little gifts etc. and went to great lengths to cover his tracks.

Peter Sarsgaard has the difficult role as Chuck Lane, the editor who fired Stephen Glass, and he does a brilliant job. He was new to the position and placed in an awkward situation - does he defend his worker or do the right thing and fire him, thereby alienating himself from the rest of the staff of the magazine when faced with the compelling evidence given to him by the rival online magazine, Forbes Digital Tool? It is during this part of the movie that is the most satisfying. Not that seeing someone get fired is enjoyable, but the development of the characters is really taking shape.

Shattered Glass is ultimately a satisfying movie that makes you feel that there is some justice after all. It will make you question what you next read in the media(!!), and hope that there are editors and writers out there who really do check the facts before going to print.