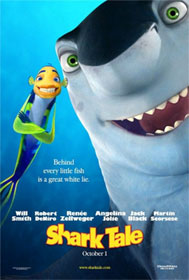 Behind Every Little Fish Is A Great White Lie

Synopsis:
An underwater tale where the son of a shark boss (Robert De Niro) is found dead and a bottom feeder fish, Oscar (Will Smith) is found at the scene. Oscar decides to use the episode to bring some fame and glory to himself, declaring himself the 'sharkslayer'. He thinks that he will win favour with the underworld fish and favour with his regular pals of the reef. The only problem with telling a little lie is that is grows and soon Oscar finds himself in deep water.

My Verdict:
'Shark Tale' is a delightful story about where we belong in this world, told in an underwater setting where the beauty of the ocean is such a wonderful setting with so many colourful fish to show. Here, the story is set amongst the inhabitants of a reef, who use the reef to hide from the hungry predators, sharks. The sharks reside in a shipwreck, which looks very much like the wreck of the Titanic.

Life is humble for Oscar, who is very close to the bottom of the food chain. He works at the local car wash, make that, whale wash, and has a crush on local gal, Angie (Renee Zellweger). Oscar gets involved with a white pointer shark, Lenny (Jack Black) who has an eating problem - he is a vegetarian, which is a big problem if you are a white pointer shark and the son of the mob boss. Lenny helps Oscar one day and they become friends until Lenny's brother dies in an accident. The trouble with Lenny and Frankie is that they are the sons of mafia style shark boss Don Lino. He is mad to say the least when Frankie is found dead, and vows to avenge his death. And on goes the 'Godfather' style story.

'Shark Tale', using its underwater setting, is such an easy movie to watch - maybe it's the gentle ebbing of the water, the motion of back and forth that is very relaxing. There is ample opportunity for the Dreamworks team (of 'Shrek' fame) to indulge in some very colourful characters and give them some very vibrant colours, making the sea-life look so realistic.

There are numerous morals in this story and various references to other movies, including 'The Godfather ' and 'The Untouchables' and it has an upbeat soundtrack, which moulds well with the re-invented 'Carwash' by Christina Aguilera and Missy Elliott. Some of the references will not be noticed by younger viewers and are obviously in place to please the older audience, giving 'Shark Tale' the holiday appeal of a family movie. Some of the lines may be missed, as is so often the case in animated movies, that a second viewing is needed to cover all the bases. 'Shark Tale' is an easy movie to watch that will certainly please a wide audience.