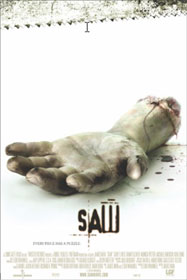 Every Piece Has A Puzzle

Synopsis:
A young man named Adam (Leigh Whannell) wakes to find himself chained to a rusty pipe inside a decrepit subterranean chamber. Chained to the opposite side of the room is another bewildered captive, Dr. Lawrence Gordon (Cary Elwes).

Between them is a dead man lying in a pool of blood, holding a .38 in his hand. Neither man knows why he has been abducted; but instructions left on a micro cassette order Dr. Gordon to kill Adam within eight hours. If he fails to do so, then both men will die, and Dr. Gordon's wife, Alison (Monica Potter), and his daughter will be killed.

Recalling a recent murder investigation by a police detective named Tapp (Danny Glover), Dr. Gordon realizes he and Adam are the next victims of a psychopathic genius known only as "Jigsaw." With only a few hours left to spare, they must unravel the elaborate puzzle of their fate in the midst of mounting terror. The killer has provided them with only a few clues and two handsaws - too weak to break their steel shackles.

My Verdict:
'SAW' is a psychological horror thriller created by two Melbournians, James Wan and Leigh Whannell, that was initially a small project for their film studies but evolved into a movie worthy of notice from overseas attention, namely the United States, where it was eventually shot in 18 days. This interest also managed to attract attention from some higher profile actors who came on board as they read the script and realised that they couldn't wait to be a part of this amazing movie.

The premise is pretty much along the lines of a pathological killer up to no good (when aren't they?), but this movie has some incredible twists to the theme, which makes it unique from other similar genres. This time two men find themselves in a disgusting, filthy bathroom that has long since ever been used, but they are chained to the fixtures, unable to leave. As they discuss their dilemma, they find objects on and around them that are meant to 'help' them escape, a task easier said than done. After introducing these two main characters, Adam and Dr Lawrence Gordon, flashback sequences are used to piece together how and why they are there. This then offers the chance to introduce a few other characters, including two detectives Tapp and Sing, who are working on the case, intrigued by its repugnance, but also by the killers disturbing mind. Obviously this person needs to be found and soon.

'SAW' is a gruesome, brutal, bloody and shocking movie. Some of the scenarios that the killers' victims find themselves in are almost too much to bear, but they all find themselves having to make a choice - escape within a time limit or someone they know will be killed instead. Urgency is paramount, by the victims, by the detectives - and definitely by the audience.

'SAW' is one terrifying, disturbing and deeply unsettling movie that will get at the core of your deepest psyche and almost make you too scared to leave the theatre when the credits roll, such is its impact.