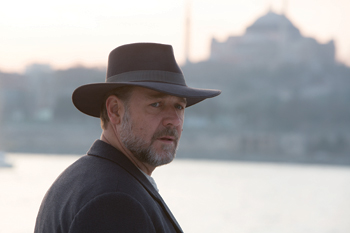 Synopsis: Russell Crowe's directorial debut, The Water Diviner, is an epic adventure set four years after the devastating battle of Gallipoli during World War I. Australian farmer Joshua Connor (Russell Crowe) travels to Turkey in 1919 to discover the fate of his three sons, reported missing in action. Initially blocked by military bureaucracy, his determination unwavering, he is helped first by the beautiful Ayshe (Olga Kurylenko) who owns the hotel in which he stays in Istanbul and then by Turkish Officer Major Hasan, who had fought against Connor's sons. Holding on to hope, Connor and Major Hasan must travel across the war-torn landscape to find the truth, and for Joshua to find his own peace. 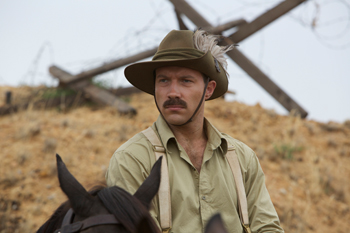 About The Story - A Way Of Looking At Gallipoli

In the course of researching a project on Australian history, Melbourne based author and screenwriter Andrew Anastasios came across a letter from a man named Cyril Hughes, a Lieutenant Colonel who was an integral part of the Imperial War Graves unit bringing order to the abandoned battlefield at Gallipoli, in the years immediately after the First World War. In that letter was an intriguing line - 'One old chap managed to get here from Australia, looking for his son's grave."

Gallipoli has frequently been represented on Australian (and international) screens. Within weeks of the landings in 1915, two re-creations were staged by Australian film companies. It has taken a long time for a film around the ANZAC legend to be created in Australia that wasn't focused on the iconic nature of the battle story, but that sought to pursue the intimacy and poignancy of one man's search for his son. The Water Diviner takes that search as it's starting point and importantly also sees the battle and it's aftermath from both sides, and in a broader context.

In fact the film opens not with the ANZACs, but with the Turks - like the Allies, they are a mixture of veteran soldiers and -terrified boys'. The experience was about devastating trauma, on both sides.

The Water Diviner has a view of the Gallipoli story very strongly centered on forgiveness - of others and of oneself. The crushing pressure of guilt for Joshua Connor almost overwhelms him, but he learns that the healing power of love can provide superhuman resilience, strength and determination.

Joshua Connor is trying to find his son in the remnants of an old world, out of which a new world is being violently created. There is so much destruction all around him, so much ruin, but from it will rise a new world.

The world in 1918 was reeling from the end of the Great War and witnessing the crumbling of once-great empires. The six hundred year old Ottoman Empire, now defeated, Anatolia, is occupied and partitioned leaving that which would become modern Turkey.

Constantinople, now Istanbul, into which Joshua Connor must delve, has always been one of the world's most significant cities - the capital, at various times, of four empires, fought over for centuries because of its strategic position on the Silk Road and as the only sea route between the Black Sea and the Mediterranean.

An October 1918 treaty granted the victorious Allies the right to occupy forts controlling the Straits of the Dardanelles and the Bosporus. The British claim they have no intention to occupy Constantinople, but in November a French brigade enter the city, followed by British, French, Italian and Greek ships which deploy soldiers on the ground. So begins the modern Occupation of Constantinople, which will last four years.

As 1919 begins, the League of Nations is founded and global events that have resonance even today take place - in February, Soviet troops move in to occupy Ukraine. The Russians, British, Italians, French, Greeks, and Armenians all make claims to the Anatolian lands, but the ethnic Turks begin to resist. The Greek campaign for Western Anatolia begins in May 1919, with Greek troops, led by the Evzones, landing in Smyrna. The Greek troops move from Smyrna outwards, and the Turkish War of Independence begins. Mustafa Kemal (Atatürk), a military officer during World War I and leader of the Turkish National Movement, leads the Turkish side in this battle for identity that will end with the establishment of the Republic of Turkey in 1923.

Despite all these competing forces and uneasy loyalties that shift like quicksand, Joshua Connor finds a true friend in Major Hasan, and together they will navigate the war-torn country in Joshua's search for his sons.

Although barely one fifth of the story of The Water Diviner takes place in Australia, it was the base for nearly three quarters of the shooting of the film.

Production started in December 2013 with a three week shooting period in Sydney, predominantly in studio sets for scenes set in an Istanbul hotel and with a couple of days of carefully selected and dressed locations in the older sections of the city.

That was followed in January / February 2014 with five weeks in South Australia, both for the Australian countryside scenes and with the southern coast standing in for Gallipoli and some near-desert locations standing in for rural Turkey.

This was a challenging, at times brutal environment, during the heat of summer, with unpredictable weather conditions. However, the experience sealed the determination of the cast and crew to be, in Russell Crowe's words, relentless.

Producer Keith Rodger says: 'We knew we were heading out to film in the middle of summer, but the unusually extreme heat in that area of South Australia was something I don't think anyone could have expected." 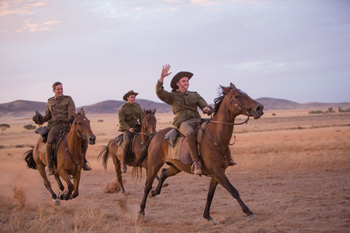 'It was 49.5 degrees Celsius on set one day as we were shooting a train ambush in a remote countryside. That's a hard thing to manage on a good day, way out of the normal range, and obviously safety is foremost. Then for the battlefield/trenches 'set" in McLaren Vale we were caught by the other extreme - torrential rain stopping filming."

Actor Yilmaz Erdoğan (Major Hasan) says of the experience: 'Filming in Australia had its challenges. Four seasons in a day, complete with heat, wind, and a dust storm. The first week wasn't easy because we didn't expect such a thing. I got the idea it's a cycle of heat, wind, storm, rain, but luckily our costumes included coats!"

Producer Andrew Mason says: 'Film crews are tough, but when you see members of the team affected by the heat you just have to abandon a days shoot - and the same thing happens when it rains on a quarry and the battlefield set becomes an un-workable mess. None of these things are good; but they do provide a kind of edge to the process of shooting."

Key members of the Australian crew and cast then travelled to Turkey for a three-week shoot, both in iconic locations in Istanbul and in ancient sites on the Mediterranean coast. A sizable Turkish crew and many cast members joined the production and there was an instant bond formed, helped by the eagerness of all the team to make the production process smooth and the scenes memorable.

Turkish authorities were overwhelmingly helpful, with the filmmakers allowed to shoot in Topkapi palace, in the crowded streets of the Balat section of Istanbul and even in the iconic and wonderful Blue Mosque.

Post-production has been based in Sydney, with the editing team joined by a crack team of Visual Effects artists, Composers, Sound crew and Colour specialists.

Russell Crowe stars as Noah in the film inspired by the epic story of courage, sacrifice and hope. Directed by...

Russell Crowe The Man With the Iron Fists

Quentin Tarantino presents The Man With the Iron Fists, an action-adventure inspired by kung fu classics as...

Three years into her sentence, John is struggling to hold his family together, raising their son and teaching at...

As Russell Crowe breaths new life into the legend of Robin Hood, this biography goes back to the times Russell...