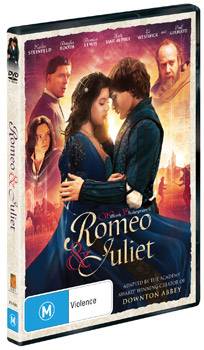 For never was a story of more woe than this of Juliet (Hailee Steinfeld) and her Romeo (Douglas Booth). Shakespeare's immortal tale of star-cross'd love is once more brought to the screen in this sumptuous and traditional adaptation as re-imagined by Academy Award®-winning writer, Julian Fellowes (TV's Downton Abbey).

When the only son and only daughter of two noble families of Verona meet and fall in love, their passion for each other is equalled only by the bitter rivalry of their houses, which, along with fate, has conspired to keep them apart. The result is a desperate, drastic and dramatic turn of events that will forever change the lives of all.

With breakout performances from rising stars Douglas Booth and Academy Award nominated actress, Hailee Steinfeld, Romeo and Juliet features a celebrated cast including Paul Giamatti, Damian Lewis, Stellan Skarsgård and Ed Westwick. Carlo Carlei's vision of this timeless tale is as captivating as it was when Shakespeare penned it.