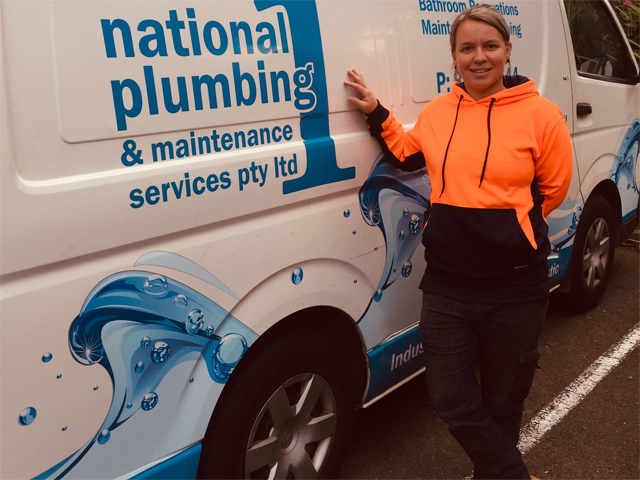 Ten apprentice plumbers from around Australia have 3,000 reasons to smile after being named the 2019 Rheem Apprentice Plumber Grants recipients. Rheem Australia has been running the program since 2012 with the aim to help foster the future generation of plumbers. This year there were $30,000 in Grants.

The 10 Rheem Apprentice Plumber Grants recipients each receive $2,000 to go towards their college fees and/or textbooks, a $1,000 tool voucher, and a tool tote to help carry their tools.

"From speaking with apprentice plumbers – current and past – their teachers and their employers, these are things that go a long way to help up-and-coming plumbers to achieve their goals," says Rheem CEO, Chris Taylor.

This year's recipients are aged from 15 to 43 and hail from around the country – from remote regions to metro areas – and each has a clear aim: to be a great plumber. They range from Blake bin Swani, a young indigenous man and father of two from Broome, WA, who is also a local football coach and mentor for other local Noongars; mature age apprentice Reannon McCann from SA, a stand out AFL Women's player and captain of her premiership winning team for past two years; NT father-of-five, Carl Macic, who is training to be a plumber while also working as a policeman and would like to one day work with his kids in a plumbing business ("That would make me the happiest plumber on the block!" he says); and Luke Cox, whose family's savings had to be used to pay for Luke's surgeries when he suffered heart failure in 2017. According to Luke's employer, while recovering from surgery to receive a pacemaker, Luke "wanted to just go back to work!"

"These apprentices represent the future generation of plumbers and we are proud to be able to provide support," says Chris Taylor. "The plumbing industry has provided immense support to Rheem for more than eight decades and these Grants are designed as a thank you and to help foster apprentices. We are thrilled to play a small role in helping encourage those who might be struggling financially or need a morale boost to continue with their studies."

"It was yet another tough decision for our judges this year, with so many worthy apprentice plumbers applying!" says Taylor. "We wanted to provide some encouragement to several other apprentices, hence providing these additional Recognition Awards.

"We would like to thank all our applicants, their employers, TAFE and RTO teachers and plumbing merchants. Since we launched the Rheem Apprentice Plumber Grants in 2012, we have discovered just how many amazing apprentices there are around Australia."

The applications were reviewed by three judges from the TAFE sector, the Master Plumbers Association and private industry.

Here are just some of the other outstanding winning applications Rheem received:
Arthur Lynas, who is not eligible for funding for his TAFE fees due to previous studies undertaken prior to his apprenticeship. This means Arthur is covering the $12,000+ fees out of his own pocket on an apprentice wage. His employer says he has "shown great potential to be part of the next generation of leaders in our industry".
17-year-old Lewis Bracey, who has to travel from Launceston to Hobart for TAFE (200km each way), wants to work as a plumber in Antarctica and has played state rep basketball.
Queensland's Connor Stafford, 21, who is a fourth generation plumber and was nominated as a Plumbing Ambassador.

Since the Rheem Apprentice Plumber Grant program was launched in 2012, almost $250,000 in Grants and Recognition Awards have been awarded to apprentice plumbers. The full list of this year's recipients can be found on the Rheem website.

Question: Congratulations on being named a 2019 Rheem Apprentice Plumber Grants recipient! What does this award and grant, mean to you?

Reannon McCann: Being named a Rheem grant recipient for 2019 was a very big surprise and I was over the moon to receive the phone call to be one of 10 winners from all over Australia. As a female in a male dominated industry and as a 1st year apprentice I feel privileged to be recognised.


Question: How will you spend the grant?

Reannon McCann: The money received from the grant will go a long way to increasing my toolkit which will assist me during my time as an apprentice.


Question: What inspired you to become a plumbing apprentice?

Reannon McCann: I chose plumbing because it offers a variety of different opportunities which allow me to inherit the ability to learn many new skills. It's a trade that provides the opportunity to have a career that you are always continuing to learn. Plumbing will also allow me to walk away with a trade and a career.


Question: How difficult has to been to overcome the challenges associated with being a mature-age apprentice in a male-dominated industry?

Reannon McCann: I'm very fortunate to work for a company that accepts me as both a female and a mature-age apprentice. I'm proud to be one of the few females in this industry and as a mature age apprentice I feel I have a great amount of life experience which helps me be the best plumber I can be.


Question: How do you manage training and playing AFLW with your apprenticeship?

Reannon McCann: This year I have decided to focus on my apprenticeship and have a year off playing football. I want to make sure I am fit and healthy for my job but hope that in the future I can move into a coaching role as football is a great passion.


Question: What advice do you have for women who are hoping to become apprentices?

Reannon McCann: The best piece of advice I can give is if it's something you have thought about doing, it's never too late to change career and do something you love. I was 33 when I decided to leave hospitality and it was the best decision I ever made. I love getting my hands dirty and ending the day having learnt something new. Your gender doesn't matter - you're more than capable to work in any field you desire.

Reannon McCann: A typical day for me involves a 6:15am wake-up alarm before leaving the house at 6:45am and heading for the site or office for a 7:30am start. Our jobs vary all over Adelaide so each day is different and exciting. We work 8.5 hour days and finish at 4:00pm. From here I head home to relax, go to the gym, cook dinner, watch a movie or read a book. I usually head to bed around 8:30pm to get a good night's sleep before I do it all again.