Once Upon A Time In The Midlands 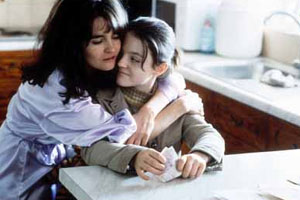 Synopsis:
Dek and Shirley live together with 12 year-old Marlene, her daughter by the sexy, delinquent Jimmy who went off into the badlands of Glasgow years ago and hasn't been heard from since. Decent-but-dull Dek loves Shirley so much that he humiliates her by proposing without warning on national television. Like everyone else Shirley has ever met, Jimmy is watching when she turns Dek down on TV and he returns to town, determined to win her back. Shirley seems destined to succumb to Jimmy's charms, but he hasn't reckoned on the obstacles: their daughter Marlene, his sister Carol, her estranged husband Charlie, their sons Emerson and Lake, Carol's daughter Donna, her boyfriend Donut. Nor could he anticipate the heroic, last-minute challenge from mild-mannered, love-sick Dek.


My Verdict:
Once Upon A Time In The Midlands is a comedy/drama that puts a new slant on the traditional western. In this case, the dark stranger Jimmy (Robert Carlyle) returns to town as expected, but the setting is transposed to the middle of England. This is a setting of average people living ordinary lives. Jimmy sees Dek proposing on television to Shirley, his ex and mother of his child, Marlene by sheer chance. This is enough for Jimmy to decide to return and 're-capture' Shirley. What he doesn't reckon on, is Shirley's resistance. He thinks it is as a simple as turning up and she will ride off with him into the sunset.

Robert Carlyle is his usual wonderful self. He gives Jimmy a live for the moment attitude with just a touch of humanity. Shirley (Shirley Henderson) is determined to hold onto what she has got no matter how hard Jimmy tries. She is frail yet strong and hides a side others don't often see. Rhys Ifans is great as the inept Dek. He is such a loser with a heart of gold that it's hard not to feel sorry for him.

The Midlands setting is generally plain which is in keeping with the lives of the characters. They know they will never become more than they are, and are somewhat satisfied with this knowledge. It is this aspect that is the most charming feature of the movie.

Once Upon A Time In The Midlands is a lovely movie that is full of wit, endearing characters and a believable story. It is a feel good movie that satisfies, maybe not forever, but long enough to remember as the gentle piece it is.