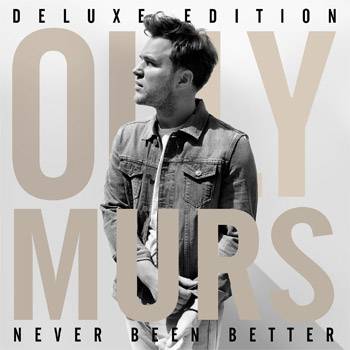 Olly Murs, one of pop music's biggest and most enduring stars, will release his eagerly anticipated fourth studio album Never Been Better November 21st through Sony Music Entertainment Australia. Driven by the funk guitar swagger of first single -Wrapped Up' featuring Travie McCoy, available to purchase from 5:30pm AEST this Friday October 3rd, Never Been Better is the sound of an artist at the very top of his game.

Co-writing the majority of tracks, Olly Murs is back with his most impressive album yet. Highlights are many and include the classic soul of -Let Me In' written by Olly and Paul Weller, the addictive pop of -Up' featuring Demi Lovato, the straight ahead romance of -Beautiful To Me' and the Ryan Tedder gem -Seasons'.

'I know I say it every time I make a new album but it's true, your experience grows, your outlook changes," Olly admits. Never Been Better features the best vocals Olly has ever recorded while his song writing sparkles. There's a real sense of growth throughout these grooves, of an artist reaching out and grasping new and broader horizons with both hands.

'With every album, you take more risks," Olly says. 'I'm 30 now and I was 26 when I did the first album. It's been two years since Right Place Right Time – though it doesn't feel like it. So this is me, two years on, and I think the new record reflects that. I think this album is my -I mean it' album. It's time to come out of my shell and get a bit more serious."

With three multi-platinum albums, four number one singles and numerous sold out arena tours under his belt in the UK, Olly Murs has had a huge presence in Australia throughout his career including a East Coast tour in 2013.  His 2012 ARIA Gold certified album Right Place Right Time featured the Double Platinum ARIA Top 5 hit -Dear Darlin', as well as the ARIA Top 5, number one Airplay and Triple Platinum certified single, -Troublemaker' feat. Flo Rida.

8. Hope You Got What You Came For

15. Us Against The World