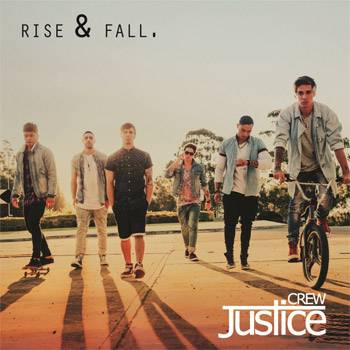 Australia's urban-pop phenomenon Justice Crew have announced that their brand new single -Rise & Fall' will be released on October 17th through Sony Music Entertainment Australia and is available to pre-order now.

As Justice Crew member John Pearce explains, "We have had our pop music and our club bangers, but we edged off to the side with -QUE SERA'– and now with -Rise & Fall' we are exploring a whole new side to Justice Crew. It's got a sort of 'love' meaning behind it… it is a romantic song, but the lyrics are really metaphorical."

After teaming with Canadian hit-makers The Messengers (Chris Brown, Pitbull, Iggy Azalea, Justin Bieber) in Los Angeles earlier this year, Justice Crew unleashed -QUE SERA', presenting a different sound for the Crew showcasing their artistic maturity. A heroic song that celebrates the posse's camaraderie and longevity alongside universal ideals of resilience and positivity, it went on to achieve four-times Platinum sales after breaking records as the longest-running number one ever on the ARIA Singles Chart, spending an astonishing nine weeks at the top.

Justice Crew originated as a multicultural collective of dancers in Sydney. They realised hip-hop's DIY philosophy of "dreaming big", developing sensationally into all-round entertainers – dancers, vocalists and songwriters. Since breaking out in 2010, Justice Crew have enjoyed a series of hit singles including 2012's -Boom Boom', their first number one ARIA single now certified six-times platinum. They soon won a fan in Pitbull, who scooped them up for his RCA-affiliated label. Along the way, Justice Crew have supported Janet Jackson, One Direction and, in North America, Pitbull and Kesha as well as their own expansive Australian headlining #HYPETOUR earlier this year.

-Rise & Fall' is another taste of what is ahead for Justice Crew's long-anticipated debut album, set for release later his year – which, as Solo explains, "rises and falls with slo' jams and dance numbers." Meanwhile, these social media favourites are generating heat globally with -QUE SERA'. The sextet recently returned from a US promo jaunt and as John himself says with typical understatement, "The hype is slowly building!"