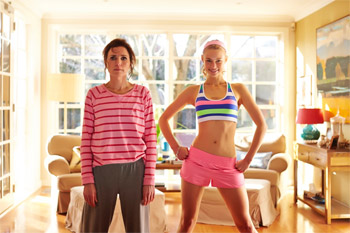 Synopsis: Gristmill (Upper Middle Bogan, The Librarians and the upcoming children's TV series Little Lunch), is proud to announce that its debut feature film, Now Add Honey, will have its world premiere at the Bentonville Film Festival in Arkansas, USA in May.

The inaugural film festival, co-founded by Academy Award winner, Geena Davis, will highlight and champion women and diversity, both behind and in front of the camera, in commercially minded films.

Now Add Honey is the story of Caroline Morgan (Robyn Butler), a middle aged woman, whose life falls apart when her movie star niece (Lucy Fry) comes to stay after her mother, (Portia de Rossi) is sent to rehab.

Robyn Butler, writer, producer and star of Now Add Honey, says 'I am thrilled to bits to have been invited to the Bentonville Film Festival. I wrote this movie to celebrate women and girls and I cannot think of a better place to kick off our movie than in a festival designed to celebrate women and girls. Also, I hear Bentonville has a lot of pie."

Geena Davis has long been a huge advocate for the advancement of women in media and co-founded the festival, inducing the support of heavy hitting commercial players, Walmart and Coca-Cola, to actively work against the disappointing reality of women's representation in film.

A study released by the Geena Davis Institute of Gender in Media, conducted across eleven countries including Australia, concluded that:

31% of speaking roles were occupied by females. 23% of protagonists were females. 21% of filmmakers (writer/producer/ director) were female. On screen, women were hardly ever represented as professionals. For instance 7% of females were represented as lawyers.
The BFF is seeking out films with different stats, like Now Add Honey, in which 55% of speaking roles are occupied by females and 100% of protagonists are female – one of whom is a successful and senior lawyer – and 60% of our filmmaking team is female.

Now Add Honey
Release Date: Bentonville Film Festival in Arkansas, USA in May
Now Add Honey will be distributed by Roadshow Films in Australia and released on November 5.

It's 1983. A naive man with lethal narcotics hidden in his stomach is detained by Australian Federal Police....

The use of dead car crash victims in the Morgan Brothers' "Blood and Bone" fertiliser has been a huge boon to...

Thanks to Roadshow Entertainment here is your chance to win one of 5 Twenty Something Packs including: Twenty...