Oscar winner Nicolas Cage is an actor who thrives on risk taking. He won an Oscar for his realistic portrayal of a self-destructive alcoholic in Leaving Las Vegas, and has starred in a plethora of big Hollywood films such as The Rock, Con Air, National Treasure and Ghost Rider, while at the same time pushing himself in smaller films as diverse as Sonny, Adaptation and The Weather Man. Adding to the latter list of the small and eclectic is Werner Hertzog's Bad Lieutenant: Port of Call New Orleans, which had its worlds premiere at the recent Toronto Film Festival. Loosely based on the original Bad Lieutenant that starred Harvey Keitel, Cage steps into the role of cop Terence McDonagh, a now drug-addicted detective in post-Katrina New Orleans.


In this very exclusive interview with Paul Fischer, Cage talked about the challenges of doing this film as well as his own ambitions as an actor three decades after his career took off as an 18-year old actor ion Fast Times at Ridgemont High.


QUESTION: On the page, was the character in Bad Lieutenant somewhat different than the way that you decided to play him? It seems to me that you gave, really, your own stamp on this guy.

NICOLAS CAGE: I had an idea of where I wanted to go and I really felt that you could go into a dimension that was more abstract, because of the drugs he was on, so that I could go outside of the box, and hit more extreme levels, which is a pretty fun thing to do, when you have carte blanche to do it, because he was on crack and he was on coke and he was on heroin. So it allowed me to get a more extreme kind of performance, which I find quite amusing.


QUESTION: I understand there was quite a lot of improv on your part, on this. How much were you able to get away with, improvisationally? 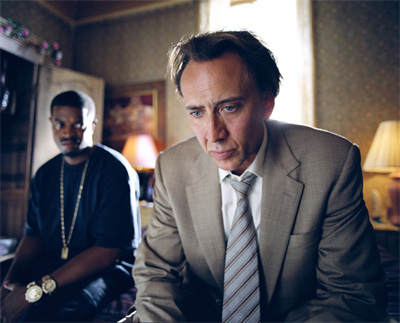 NICOLAS CAGE: Well, the scene in the retirement home, some of those lines I wrote when I was in Australia working on another movie, but a lot of the stuff was improvised on the set, like the scenes in the drug den, or in the car, when I was with all the gangsters. All that stuff sort of just came out.


QUESTION: Is there something more freeing for you as an actor, to do something like this, as opposed to any of the more mainstream Hollywood films that you do, almost kind of a counterbalance to this kind of character?

NICOLAS CAGE: Yeah - I mean, whenever I make a movie, whether it's a big adventure film, or a more independently-spirited, midnight kind of movie, I think they inform each other, in that I'm always going to try to find something new I can do with a character, even if it's trying to fit within a formula, or if it has no formula. And then I can learn from the independent movies, apply and sort of cherry pick what I liked from those movies, and put them into the more mainstream movies.


QUESTION: What was it about this particular project that appealed to you from the outset? Was Herzog's involvement almost paramount for you to be a part of this film?

NICOLAS CAGE: Well, I was fascinated with the idea of working with Werner. I mean, I'd grown up watching his movies, and so I had an interest in him, but I think it was the audacity of the project that compelled me. I liked the idea of doing something this outside the box, and this extreme with Werner. I mean, no one would really think to do a remake of Bad Lieutenant, so that alone was reason enough to do it. 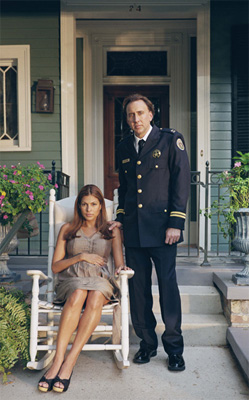 QUESTION: Do you see this as simply being a remake of Bad Lieutenant? Because the two films are very disconnected from each other, it seems to me.

NICOLAS CAGE: Yeah, that's true. I meant in the beginning, when they first talked to me about it. It was like, "Well -- the title Bad Lieutenant, and Werner's going to do it." But to me, it was clear that there was a different direction we could go in. And the movies stand apart, and they're both originals but for different reasons. To me, the Abel Ferrar movie is much more of kind of a religious program, where Harvey's character's going through all sorts of Catholic guilt. Whereas with this one is he gets existential, and there is no guilt.


QUESTION: Do you see any redemptive qualities in this character?

NICOLAS CAGE: I mean, if there are, that's for you to find.


QUESTION: Now you are incredibly busy. What drives you to work so hard?

NICOLAS CAGE: Well - I mean, at that time that I was doing all this, I was being driven out of necessity, and out of trying to find new ways to express myself, because I had a lot of stuff going on. And I wanted to be productive with that, and not be constructive, as opposed to be destructive. So that's one of the reasons why I act, out of necessity, because it helps me channel my energies in such a way that I don't have to implode, so I can just sort of put it into the work. 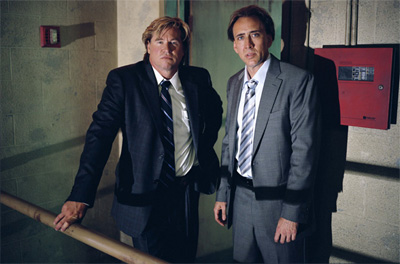 NICOLAS CAGE: Thirty years now. It's been since I was 15.


QUESTION: Is the passion for acting as intense now as it was when you began?


QUESTION: And trying to find new characters that still excite you? Is that continuously challenging for you?

NICOLAS CAGE: Yes. I need to be a little bit fearful in order to go into it with some energy. You know, I feel that if you're somewhat uncomfortable or nervous about a role, that means you should do it,n otherwise, it's too easy.


QUESTION: Now, is there going to be another National Treasure film? Do you want to continue with that franchise?

NICOLAS CAGE: Yeah. I mean, I would be happy to, because I feel those movies supply a need for families to have a chance to get together and congregate with their children, and to be entertained and enjoy themselves. I like giving families something to look forward to. 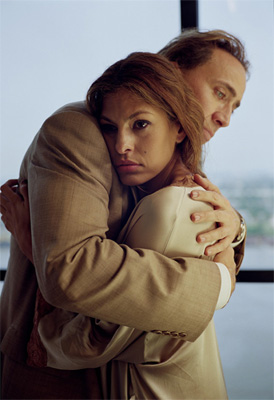 QUESTION: In the meantime, you've done The Sorcerer's Apprentice, which is a really interesting idea. How close to the original source material is that film?

NICOLAS CAGE: It's pretty extended and removed, because that sequence is only one sequence in Fantasia, that's only maybe three or four minutes. So it's very hard to make a two-hour movie out of a three-minute segments with a bunch of broomsticks picking up pails of water. So, it's quite different. I mean, there's a lot more that's been added on and built around that sequence. It's a much more involved story structure.


QUESTION: Is it a lot darker?

NICOLAS CAGE: Is it a lot darker? Well, I wouldn't say that, no. I mean, there are spooky moments in the movie, as there should be, but I think the movie still has an edge to it, but it's still designed to entertain the entire family.

QUESTION: What else interests you creatively? If you had to stop acting tomorrow, is there something else that creatively, in film, that you have a drive to do, or a need to want to explore at this point in your life?


NICOLAS CAGE: I'm just interested in spending some time with a good book, and perhaps, going to places that interest me historically and have some ancestry to them. Very, very reflective kinds of things at this point in my life.

QUESTION: What kind of places historically interest you?


NICOLAS CAGE: I'm interested in England, and interested in Italy and Germany, and places that I have some roots, some ancestry. You know, my father is Italian, my mother is German, so England, to me, is interesting, because of the Romans and the Saxons. So that's the perfect place for me in terms of my mix, and in terms of my ancestors. 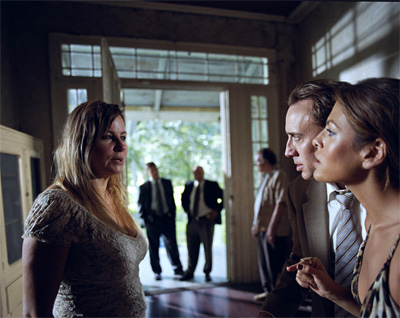 QUESTION: Are you interested in all facets of English history, or just ancient British history?

NICOLAS CAGE: I'm more interested in the ancient, but there are aspects that are more contemporary that also interest me, like Lord Nelson and whatnot. But mostly, it has to do with the ancient.


QUESTION: Is there a historical character that you would like to explore cinematically?

NICOLAS CAGE: Is there one that I would like to play?


QUESTION: Or even direct.

NICOLAS CAGE: I never really thought too much about that. I mean, I haven't been invited to do that very often, at least, to play historical characters. But maybe it's something I should try to think about doing, because it would be new for me.


QUESTION: And you're always wanting to explore new characters. I think that would be perfect.

NICOLAS CAGE: Yes. So I just have to find the personage in history that would be right for me.


QUESTION: Now, you've directed, but only on a very small scale. 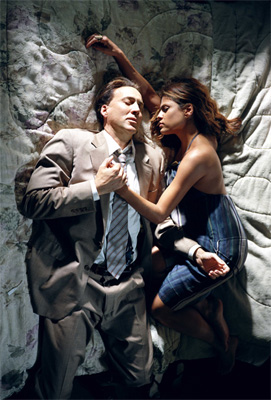 
QUESTION: Are you looking for something to direct again?

NICOLAS CAGE: Yes. I mean, I just have to have the time to direct. As you know, it takes a year of your life to direct. I'm not in a position to do that right now, but at some point I will. You never know.


QUESTION: What have you done recently as an actor that you're particularly excited about? That you're looking forward to audiences seeing? Apart from Bad Lieutenant, of course.


QUESTION: Kick-Ass seems like a really interesting, unusual take on the sort of superhero action genre. Do you agree with that?

NICOLAS CAGE: Well, I haven't seen the movie, but it's my understanding that it is unusual, and that it's not like anything else. And that seems to be what the response has been, that people have been talking about in various media outlets.


QUESTION: What's coming up next? What are you going to work on next, do you have any idea?

NICOLAS CAGE: I'm doing a movie with Roger Donaldson called The Hungry Rabbit Jumps, and that starts in December back in New Orleans. And it's a movie about a vigilante ring, which is interesting. And then after that, a movie called Drive Angry.

In Werner Herzogs new film "The Bad Lieutenant: Port Of Call New Orleans," Nicolas Cage plays a rogue detective who is as devoted to his job as he is at scoring drugs -- while playing fast and loose with the law. He wields his badge as often as he wields his gun in order to get his way.

In the aftermath of Hurricane Katrina he becomes a high-functioning addict who is a deeply intuitive, fearless detective reigning over the beautiful ruins of New Orleans with authority and abandon.

Complicating his tumultuous life is the prostitute he loves (played by Eva Mendes). Together they descend into their own world marked by desire, compulsion, and conscience. The result is a singular masterpiece of filmmaking: equally sad and manically humorous.