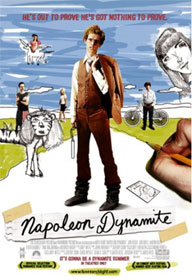 He's Out To Prove He's Got Nothing To Prove

Napoleon lives with his Grandma (Sandy Martin) and his 32-year-old brother unemployed brother Kip (Aaron Ruell), who spends his days looking for love in Internet chat rooms. When Grandma hits the road on her quad runner, Napoleon and Kip's meddling Uncle Rico (Jon Gries) comes to town to stay with them and ruin their lives.

Napoleon is left to his own devices to impress the chicks at school and help his new best friend Pedro (Efren Ramirez) win the election for Student Body President against the stuck up Summer (Haylie Duff); all the while making sure to feed Grandma's pet llama Tina, and avoiding association with Uncle Rico and the herbal breast enhancers he sells door to door. Napoleon and Pedro put their skills and knowledge of piatas, cows and drawing to good use, but it is a surprise talent that leads the two to triumph in the end.

My Verdict:
Unique. Quirky. Eccentric. There are so many words to try to explain this incredible movie that they barely cover all the descriptions possible. 'Napoleon Dynamite' is a very individual movie that there really aren't any other movies that you can compare it to, and that is why it is such fun. Waiting for the next moment in Napoleon's life is what makes this movie such an anticipation of enjoyment.

Everyone knows of the uber-geek at school - the glasses, the hair, the clothes, the way they talked, the way they acted all combined to create this person that was like no other. In Napoleon Dynamite's case, he really is a one of a kind at Preston High School. He is mistreated by the other students yet doesn't seem to react to their treatment as if he is unaware that he is different, probably because he lives in a home where his Grandma, brother Kip, and Uncle Rico are all weird too. For Napoleon, this is normal and that is what is so funny. Watching Napoleon not realising his uniqueness is fascinating. Ultimately Napoleon will become the anti-hero and rise above all the others.

Jon Heder plays the four-eyed red-afroed Napoleon in a very droll deadpan way. There is nothing dynamic about his personality and Jon has perfected the quaint role. Aaron Ruell as Napoleon's brother Kip, is also the perfect nerd. They play roles against each other yet there is that special blood-brother relation aspect to their relationship. And then there is Jon Gries as Uncle Rico who is stuck in a time warp back in 1982. Combined with some of the other totally eccentric characters of the town of Preston, Idaho, they make the movie a gamut of characters that are so unconventional yet you can't help but warm to them and even love them for their individuality. Whatever you do, stay until ALL the final credits are over as there is an epilogue to the movie that shouldn't be missed and confirms Napoleon Dynamite as an incredible lovable person and a movie that should not be missed. Napoleon is Dynamite.