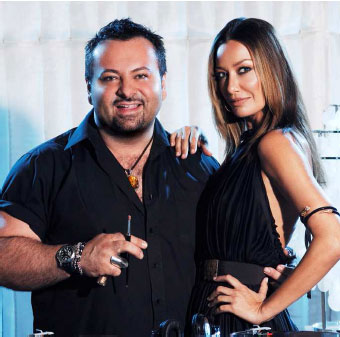 The year 2003 was momentous for many reasons: Scientists discovered 350,000-year-old human footprints in Italy. Charlize Theron garnered an Oscar for performance in Monster and the Concorde made its final trans-Atlantic flight. In the beauty world, 2003 will be remembered for the unveiling of Napoleon Perdis Auto Pilot Pre-Foundation Primer. It was five years ago that Napoleon Perdis first uttered the memorable words "Not to prime is a crime!" to herald the arrival of his legendary primer, now treasured by makeup devotees everywhere. To mark the cult product's fifth anniversary, Napoleon Perdis called for a celebration.

Who better to front the festivities than the model-turned-DJ Sky Nellor? Born in Sydney and basedin New York for the last 14 years, the statuesque Nellor is a fixture on the global party circuit.Embraced by the music, publishing and fashion industries, Nellor glides from one exclusive fete tothe next, spreading her groovy gospel and encouraging people to dance. She has hosted soireesat New York Fashion Week, Grammy events in Los Angeles, and rocked the coolest clubs in LasVegas. Nellor has also deejayed at private events for boldface names including Sean Combs,Kanye West, Missy Elliot and Fergie. Yet no matterwhere she's spinning her infectious retro beats, onething is constant: Nellor always looks a million bucks.

The mixmaster's work uniform consists of printedMissoni dresses, sexy tops and towering heels byManolo Blahnik and Jimmy Choo. Pumping outdance tunes for several hours at a time is demandingand the winsome DJ needs makeup that's goes thedistance. "I'm a girlie girl and I love makeup," saysNellor. "I'm not comfortable going to work without it.People are expecting a certain degree of glamour."Auto-Pilot Pre-Foundation Primer is a critical part ofher regime. "It sets your face, your foundation goes on smoother and your makeup lasts and lasts.It's exactly what I need."

Napoleon Perdis has always looked to fashion and music for inspiration. He first spotted Nellor afew years ago at a nightclub in New York's Meatpacking District. "The amazing thing about Sky isthat she's often the most gorgeous creature in the room," says Napoleon Perdis, who cast theformer model in the new campaign for Auto Pilot Pre-Foundation Primer. "She's in her 30s, hasworked hard to get where she is, and cares about her appearance. To me that's the Auto Pilotcustomer," he adds. That Nellor has triumphed in a male-dominated profession is also worthhighlighting. "She's like a modern-day Amelia Earhart, whose likeness is on all Auto Pilotproducts," says Napoleon Perdis.

Auto Pilot Pre-Foundation Primer is the ideal starting point for any makeup looking, whether it's aday at the office or a night on the town. Scientifically formulated to allow your makeup to glideover the skin, and laced with soothing ingredients including chamomile, yarrow extract andVitamin E, it ensures what Napoleon Perdis like to call "complexion perfection." Auto Pilot Pre-Foundation Primer evens out skin tones, makes foundation appear more natural, absorbs excessoil and calms inflammations. No wonder it's been such a worldwide hit.

"It's always in my kit," adds Nellor, who achieved success early as a model, appearing in a Guesscampaign as well as on the covers of publications including Spanish Vogue and Amica. Nellor firstjumped behind the turntables on a dare from a friend at a party in New York. Since then she hasplayed at events for Giorgio Armani, Calvin Klein and Vanity Fair. Last year Nellor performed atMaxim's 10 Year anniversary celebration and 50 Cent's album release party on the same night inLas Vegas. At New York Fashion Week she once appeared at three events in one night. "By theend of it I had to take my shoes off, which I never do," she says. Nellor played at Club Monaco'slaunch in Hong Kong, the opening of Cain Beach in the Bahamas, and the opening of the TaoBeach club in Las Vegas. Her signature sound is an upbeat blend of rock, hip-hop, funk and oldschoolclassics.

2008 has been an auspicious year for Napoleon Perdis. With four concept stores in California theAustralian beauty brand continued its association with the electronic retailer HSN and will alsosoon launch exclusively with a major prestige retailer across the U.S. In August, Napoleon Perdiswill release NP SET, a new capsule collection at Target stores across the US and Australia andreprise the brand's role as official makeup partner to the Primetime Emmy Awards. Hollywood'selite has paid homage to Napoleon Perdis since the brand's U.S. launch in 2005, praising it in thepress and donning such core products as Lip Lacquer, Camera Finish Powder Foundation andPre-Foundation Primer.

Napoleon Perdis has been "bringing out the celebrity in you" for over a decade since its Australianlaunch in 1995. As Australia's leading makeup artist, Napoleon Perdis' multi-generationalapproach to beauty and dedication to translating runway, red carpet, and music video looks toreality has driven the brand into a category all its own. Featuring pro-tips on all packaging, thevarious capsule collections reflect such brand values as "The Oxford of Makeup," "Runway toReality," and "Treasure Chest," among others. The company currently has 59 stand-aloneconcept stores and over 800 point-of-sale locations across Australia and New Zealand and 63independents in the US. In 2006, Napoleon Perdis expanded into Canada at 35 The Bay stores.