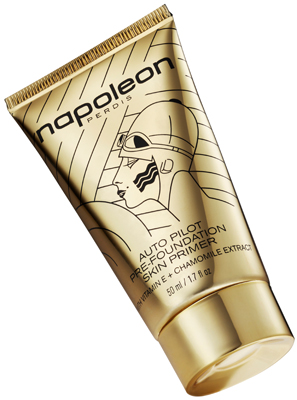 Napoleon Perdis' best-selling primer has had an upgrade: same brilliant formula, gorgeous new gold packaging. The leading runway and celebrity makeup artist has long preached that makeup application must always begin with a skin-smoothing base. His mantra, "Not To Prime Is A Crime!" has been adopted by fans from Manhattan to Melbourne and everywhere in between.

Pro Tips: Going from desk to dinner? Give your skin a quick hydration boost by using Auto Pilot as a cream cleanser to remove your foundation Reapply your evening makeup and glow girl!
Take a tip from Napoleon's beauty rulebook, and mix primer with a little foundation for a DIY tinted moisturiser.
Auto Pilot Pre-Foundation Skin Primer RRP: $55

Napoleon Perdis picked up his first makeup brush at the age of 13 to help his glamorous mother prepare for an evening out. Since then the self-taught makeup artist has long dreamed of spreading his glosspel. A native of Sydney, Australia and now based in Los Angeles, Napoleon has always sought to demystify makeup, and transform runway and red carpet trends to a wearable reality. The brand has attracted celeb fans including Jessica Szohr, AnnaLynne McCord, Leighton Meester, Kelly Osbourne, Debra Messing, Jessica Lowndes, Shenae Grimes, LeAnn Rimes, among others.

Napoleon Perdis is available at Napoleon Perdis Concept Stores, David Jones and over 875 pharmacies and salons throughout Australia.
AUS Stockist Enquiries - 1800 814 572 or www.napoleonperdis.com