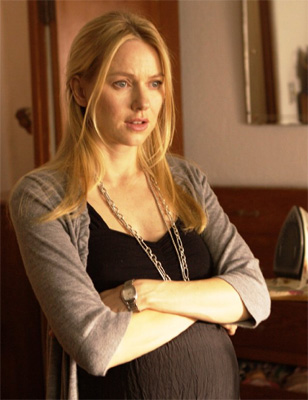 Throughout her career, the consistently luminous and diverse Naomi Watts has played a gallery of distinctive women, complex and fascinating, but none more so than her portrayal of emotionally detached lawyer Elizabeth who has an affair with her new boss [Samuel L. Jackson] in Mother and Child. At Sundance this year for a few short hours, Watts talked to Paul Fischer who first met the Aussie actress some two decades earle


QUESTION: Now was this character very difficult to get into the skin of, because you're based on my knowledge of you, you're nothing like her?

NAOMI WATTS: No. No, but I relate to her feeling of not distrust, because I'm a pretty open and trustworthy person but she's just so wounded. The level and the intensity of her pain is so great, that she doesn't want to connect to anything. Now, when I say "relate" to that, I'm not saying that I'm anything like that. But I understand that some things can hurt so much that it makes you protective. And obviously her level of pain is pretty great.


QUESTION: She says at the beginning of the film, when she's being interviewed for the job by Sam's character, that she considers herself to be very independent. Is she independent, or lonely?

NAOMI WATTS: Both, I think. One - they're synonymous. I think they've - yeah. The whole loneliness has caused independence. And - yeah, she's withdrawn, and the very fact that she starts getting too close to Samuel's character, her boss - it freaks her out. And so she has to run. And obviously she says that in the beginning, and in her first scene in the movie. But she moves wherever she needs to, because she just doesn't want to ever be in danger of connecting, or being seen.


QUESTION: The sexuality of this woman is also treated in a very interesting way. Tell me - that scene with Sam, I've never seen him do anything like that before. What kind of discussions did you have about how that was going to go? Both with him, and with your director?

NAOMI WATTS: There wasn't a huge amount of discussion or rehearsal, although Rodrigo has got lots to say. But the writing was so good. It was so clear. And I just remember seeing that scene, going, "Wow. I've never seen that before on camera. This'll be amazing."


QUESTION: The camera is on you. And it's a very sexual moment, but she's always in control of her sexuality. What goes through your mind when you do a scene like that?

NAOMI WATTS: I didn't have any choices.


QUESTION: Right. Now, you can do whatever you want. Where has that fearlessness come now that you're 41?

NAOMI WATTS: Do you mean in my life, or in my work?

NAOMI WATTS: Well, I consider myself to be quite a fearful person.

NAOMI WATTS: But - I'm working on it. But with my work, I feel like - I do have a sense of abandon. I do feel that's the one place I can throw myself into, a sense of courage. And I don't know. I feel safe doing it there. Not in my life.


QUESTION: But you're a Mom, now. So are you fearful in motherhood?


QUESTION: -- are you fearless?

NAOMI WATTS: It's just - there's always a constant fear of failure. You know, you second-guess yourself all the way. But as long as I'm conscious, and I'm going to be doing my best. But with my work - the fear is, you know, making the right decisions. Once I'm there, I'll try anything. And hopefully the director will hold my hand, doing so. Or - I'm careful in terms of how you pair yourself, with what director. I mean, I think that has a lot to do with it.


QUESTION: Well, as a woman now in her 40s, playing characters like this one, who is still very sexual - it must be very gratifying for you. Because a lot of actresses complain that once they reach a certain age, it might be difficult. You seem to find stiff incredibly rich, wonderfully vibrant women to play.

NAOMI WATTS: Yeah. Oh, thank you. I know those clichés, rules are out there. But I hope to defy them and I feel like the longer the life, the deeper it gets, and the roles should reflect that. And - yeah. I mean, I'm not going to be the ingénue any more, but that's not to say that I can't be a woman that has [LAUGHTER] - a sexy moment.


QUESTION: When you see Liev doing a play, do you wish you would be on that stage?

NAOMI WATTS: Oh, yeah. He makes everyone wish, I think. But - yeah.


QUESTION: Do you want to do a play?

NAOMI WATTS: Yeah. I'd love to. But it has to be the right play.


QUESTION: Would you do one with him?

NAOMI WATTS: I might do one without him first. I'd be too scared. He's so good. But I have to say that it's so evident in this particular play that he - he's brilliant, as he always is. And everybody around him, I think, is brilliant, too. And he sort of elevates people, I think.


QUESTION: Why did you want to do Dream House? Is it because of Jim Sheridan?

NAOMI WATTS: Well, I do quite a few genre films, actually and it is a genre that I'm interested in. I think, obviously, when a script comes to you from Jim Sheridan, it goes to the top of the pile. And already, I had Daniel.


QUESTION: Oh, you'd met him before?

NAOMI WATTS: Yeah. Yeah, yeah. A few times and so those are two really top marks - kind of people. You know, those elements are good, and very alluring. And then I read the script. It's a really good script. It's a support role. And there's another good female support role.


QUESTION: But it's a psychological thriller.


QUESTION: Oh, you're a neighbor.


QUESTION: Are you a good neighbor, or a bad neighbor?

NAOMI WATTS: It's a mystery, this one. I probably have to have a talk with a marketing person, because it's one of those films that has major twists, and if you say anything you'll give it away, kind of thing. If you say too much.


QUESTION: What about The Birds? Is that ever going to happen?

NAOMI WATTS: That's a really good question. [LAUGHTER] Speak to my agent, you know what I mean?


QUESTION: It's the same studio.

NAOMI WATTS: Yeah. I seem to do everything at Universal, yeah.


QUESTION: I mean, everyone's still wanting to know if that movie's ever going to get made.

NAOMI WATTS: I know. I don't know. Everything's like - a big question right now, in terms of, is it getting made?


QUESTION: What else are you planning on doing?

NAOMI WATTS: I'm in talks with another movie about that's going to go at the end of the year. I'm not sure if I'm allowed to officially say it yet, but it's a good one.


QUESTION: Is it a studio film?


QUESTION: And are you able to find the balance between motherhood and work?

NAOMI WATTS: Yes. Do you know what - no matter what, mothers will always punish themselves if they work. And - am I around enough? And - you know, last year I did three films, two of which were ten and 12 days. And then one big one, Fair Game. And I still have six months off, in a row. It was - you know. And even - you know, our job is the best job. Our kids go everywhere with us, and they're in and out of the trailers. And so - you know, and then my - I see my sister-in-law, who does a nine to five job, actually - probably, you know, more than nine to five. It's at least ten hours a day. And she gets to see her daughter two hours in the morning, and then she's asleep at night when she comes home. So - you know, we don't have that. We see and spend more time with our kids, probably, than the average person.

NAOMI WATTS: That one's about Valerie Plame and Joe Wilson.


QUESTION: Now you play Valerie Plame. How was that experience?

NAOMI WATTS: It was great.


QUESTION: Did you do a lot of research?

NAOMI WATTS: Yeah, I did have to do a lot of research, but it came about very, very quickly. Meaning, I basically had my baby, and then I got a call, saying, "Do you want to do this movie?"


QUESTION: And working with Sean again, obviously must be very thrilling.


QUESTION: You keep each other on your best game, I'm sure.

NAOMI WATTS: Yeah. Yeah, he does.