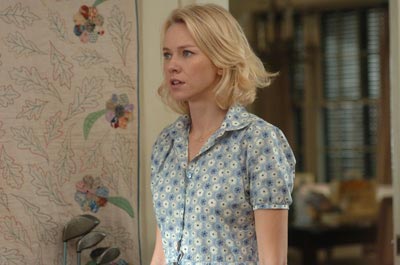 Naomi Watts sounded tired when we spoke at a Beverly Hills hotel room,and for good reason. "I'm suffering from major jetlag having justarrived from Australia", Watts, says apologetically. The actress hadspent six weeks with her son and partner, actor Liev Schreiber, who isshooting Wolverine. "I came to LA just to do press for [Funny Games]and then I head back." Watts has appeared in many tough, risk-takingfilms but nothing quite compares to what she goes through with FunnyGames. A remake of a 1997 German thriller, Naomi Watts stars as a wife and mother whose family lakeside vacation comes to an end when the family is brutally terrorized by two young men who take the family hostage, physically and emotionally brutalizing them in the process.

Naomi Watts admitsthat when offered the film, "this was not an easy decision to make. Iwrestled with the idea because it is such a difficult, disturbing,piece and very controversial. Of course I wondered how it would landwith American audiences, so although it wasn't an easy quick decisionultimately I felt it was worthwhile because it engages you, albeitsometimes with very negative feelings, I do feel like it happens withan incredible, visceral feeling and to me that's always a success,"Naomi Watts explains, further adding that director Michael Haneke, was theultimate draw-card. "He is a fabulous film maker and I had seen threeof his films, so I was a familiar with Michael's work, and blown awayby all of his films. You probably know from seeing quite a few of myfilms now, that a lot of them have great directors. I always feel thatif you're working with a great director you're in safer hands." 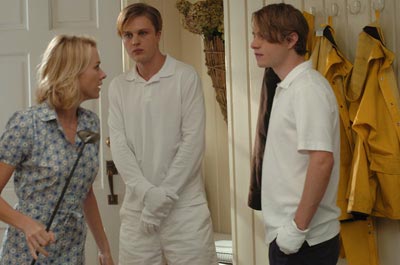 In delving into the role of a woman who succumbs to torture andcruelty, the actress, Naomi Watts says, "it's a perfect film to play out what-if?It's the kind of situation that could take place almost anywhere, toanyone. In fact I know two people who have had situations where they'vebeen held hostages at their homes. It didn't play out quite as badlybut it could have gone badly, so your imagination can take you therebecause it does feel like a truthful thing." The actress admits that itwas harder than usual leaving this character behind at the end of theday. "With a lot of thrillers that I've done, when people ask me thatquestion, I can usually leave it behind, because most of the time allof those horrific moments that play out on the screen are so fragmentedduring the film process that you're not in a place of fear. But in thiscase, Michael did it in a totally different way, in that there are nocinema tricks, no breaking of the momentum, his shots go on forever,it's so drawn out and the coverage is very simplistic. And because ittakes place in one set pretty much, we were able to shoot inchronological order."

Naomi Watts whose son is now seven months, pauses reflectively whenasked if she would have been less likely to take something like FunnyGames on had her son been born at the time. "It's a very hypotheticalquestion and something that already took such a lot of deliberation. Igrappled with it a lot and ultimately having bounced it off people Iadmire and respect so much, and they all said you've got to do it, asscary as it was. In terms of now, I'd spend more time thinking aboutit, but I can't answer the question in a word, yes or a no. But I wouldthink when my son is an adult, he chooses it, and makes his owndecisions, then, hopefully he'll understand my reasoning behind it."Naomi Watts says that motherhood has changed the way she perceives her careerat this point. "Certainly there will be a lot more negotiating, from apractical point of view, the where and the when and the how long, whoseturn it is to work and all that stuff. In terms of the content, I thinkit will continue to be my taste. Maybe I'll do a film here and there toimpress him, but it's not like suddenly my taste will change and I'llend up doing movies about small animals in the forest," Watts sayslaughingly.

Naomi Watts is enjoying being mother in her native Sydney, despite thelocal media initially being intrusive. "Whenever I get back into town,they hound you for the first five days. I don't know if then theythink, OK, let's let her enjoy her home and her family now, or if theyjust get to a point where the pictures are worthless because they'vealready been printed in each magazine. It always seems to die downafter a few days." Naomi Watts says she is trying to take a break andplay mother. "My son is seven months old. I worked five weeks on a filmcalled The International, and that was definitely tough, because it wasa struggle and a big process." And Naomi Watts confirms she is stillattached to star in a remake of Hitchcock's The Birds, based on theclassic Daphne DuMaurier novel. "It's definitely a strong possibility.The script is with a new writer, and there's a director attached, sonothing will happen this year." 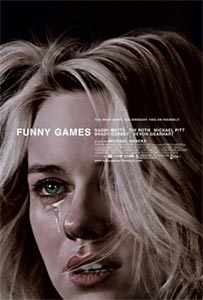 Starring: Naomi Watts, Michael Pitt, Tim Roth, Brady Corbet, Devon Gearhart
Director: Michael Haneke
Rated: R
Genre: Horror
Synopsis:
In 1997, writer-director Michael Haneke (CACHE) made the controversial Austrian thriller, FUNNY GAMES, about two young men who terrorize a family on vacation. A decade later, Haneke was convinced by producer Chris Coen to bring the story to America, filming a nearly word-for-word, shot-for-shot English-language version, even re-creating the locations and sets as obsessively as possible. Shortly after Ann (Naomi Watts), George (Tim Roth), and Georgie (Devon Gearhart) arrive in their country home, Peter (Brady Corbet), an eerily polite young man dressed all in white, including odd white gloves, appears on the doorstep, asking Ann if he can borrow some eggs for their neighbor. Peter is joined by Paul (Michael Pitt), and the Leopold-and-Loeb-like duo are soon doing horrible things to Ann, George, and Georgie, torturing them both physically and psychologically (nearly all the violence occurs off-screen), for no apparent reason other than they can, referring to the whole thing as a game. And the biggest game of all is whether the family will be alive at the end.