Synopsis: "Ethan and team take on their most impossible mission yet, eradicating the Syndicate, an International rogue organization, as highly skilled as they are, committed to destroying the IMF."

The film stars Tom Cruise reprising the iconic role of Ethan Hunt, who was first introduced to moviegoers in 1996. Returning to the franchise are Simon Pegg as Benji, Jeremy Renner as Brandt and Ving Rhames as Luther. Joining the cast are Alec Baldwin and Rebecca Ferguson.

Christopher McQuarrie to Direct the next Mission: Impossible

Paramount Pictures and Skydance Productions have announced that Christopher McQuarrie will direct the next... The one thing you can say about Tom Cruise: The older he gets, the bigger the challenges he relishes. This year...

If ever there was an actor, or rather movie star, that knows how to control a room full of clambering media,...

Tom Cruise - War of the Worlds

Cruise stars as Ray Ferrier, a divorced dockworker and less-than-perfect father. Soon after his ex-wife (Miranda... 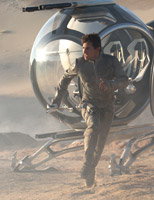 Jack Harper (Cruise) is one of the last few drone repairmen stationed on Earth. Part of a massive operation to...

Stars race against time to meet fans in London, Paris and New York on an unprecedented Red Carpet Repeat tour.

A soldier fighting in a war with aliens finds himself caught in a time loop of his last day in the battle,...