Minhee Jones is an alt-pop artist, songwriter, and multi-instrumentalist originally from Los Angeles and now based in London. The half-Korean singer has taken an evolutional musical journey, from her classical piano training at the age of four, to her punk-rock bass playing days in highschool and eventually into her own songwriting exploration in university, leading her into the solo artist she is today. Jones had initially set out to succeed as an instrumentalist, before perfecting her vocals, confiding, "I felt it was my duty to be a female instrumentalist first and challenge stereotypes in a very male-dominated field."

Jones's upcoming debut EP showcases her sheer talents with her taking lead on the drums, bass, analog synths, piano and even a vintage harmonium. Leading single "6 Feet" started out as an ode to self-medication, written about all the ways we distract ourselves from reality. Then after Covid-19 hit, it became even more poignant. Jones explains, "I feel like we're all in a place where our brains don't want to deal with the full scope of this terrible thing that has taken over the world and we are also - more than ever - surrounded with means to medicate ourselves into avoiding it, be it actual medication, booze, chocolate, Netflix, or social media. So we're stuck at home and suddenly we're drinking more and eating more and binging more tv and online ALL THE TIME in an effort to not deal with just how destructive this virus has been to humanity."

Jones describes the creation of the music video, "Amidst all the chaos, what I found so intriguing about the pandemic is just how universal it all is. Everyone on earth is fighting this common enemy and for the first time truly united in a purpose. I wanted to put together a video time capsule showing what lockdown was like all around the world and see what bound us together. So I put out a call on social media asking for people to send me short video clips of what lockdown was like where they were and what was helping them cope with the pandemic."

Growing up bi-racial (black and Korean) Jones found herself struggling with her identity, spending much of her life trying to either fit into a box that people kept saying wasn't made for her, or rebelling against the box they thought she belonged in. Now, finally finding the courage to do what she wants both musically and in life, Jones hopes she can also help others feel comfortable with just being themselves. "If one of my weird songs or videos makes someone think 'that girl does not give a fuck. Maybe I should give fewer fucks' then that would be great.", shares Jones.

Minhee Jones : I think it would be easier for me to do a complex calculus equation. I have asked so many musos this question and stumped them. If anyone wants to listen to my upcoming EP and describe it succinctly for me I will happily pay! I know what my sound is sonically but I have no idea what it is in similar artists/genre. The closest I've come is someone describing it as "feel-good bitterness." If you have any ideas on this please let me know, I'm desperate!


Question: Can you tell us about 6 Feet?

Minhee Jones : 6 Feet started out as an ode to self-medication. I started writing it early this year as I was thinking about all the ways we distract ourselves from reality - then Covid-19 hit and it became even more poignant. I feel like we're all in a place where our brains don't want to deal with the full scope of this terrible thing that has taken over the world and we are also - more than ever - surrounded with means to medicate ourselves into avoiding it be it actual medication, booze, chocolate, Netflix, or social media. So we're stuck at home and suddenly we're drinking more and eating more chocolate and binging more tv and online ALL THE TIME in an effort to not deal with just how destructive this virus has been to humanity. I built a makeshift vocal booth in my closet here in London with tape and a duvet and recorded it and had it mixed and mastered remotely at Black Bay Studio on The Isle of Lewis in Scotland.

Amidst all the chaos what I found so intriguing about the pandemic is just how universal it all is. At one point we were basically all in lockdown together EVERYWHERE. I wanted to put together a video time capsule showing what lockdown was like all around the world and see what bound us together so I put a call out on social media for people to send me clips of what was helping them cope with lockdown and then I YouTubed how to edit videos and put together 6 Feet.

Minhee Jones : A couple of the songs on my upcoming EP have feminist themes - I'm all about female empowerment and fighting against inequality and discrimination in all spheres of society. Overall though, it took me a long time to figure out who I really was as a person. Growing up bi-racial (black and Korean) in a predominantly white neighbourhood/school/high school/university I was basically a walking identity crisis for most of my life. I was always either trying to fit into a box that people kept saying wasn't meant for me or rebelling against a box they thought I belonged in. I mean, how many Blackorean punk rock bass-playing girls who drove a Jeep Wrangler and played on the basketball team did you know in high school? Haha Now I've finally reached a point where I am just doing what feels natural and if one of my weird songs or videos inspires someone else to just be their own weird self as well then that would be amazing.


Question: How did you manage to playing concerts in 51 cities in 7 days?

Minhee Jones : I'm still not really sure how we pulled this off. I have an incredible group of friends who love adventure and are absolute rockstars who were instrumental in pulling this off. I had no label, booking agent, or manager in taking on this challenge so it was months of calling and emailing venues to negotiate gigs at weird times of the day across the country, a million spreadsheets, an incredible amount of luck on the roads regarding traffic etc, multiple vehicles (at one point we had a motorcycle convoy weaving us through traffic to make gigs on time), and absolutely zero sleep. Just want to stress again I could not have done it without the most supportive friends, the folks at Fender, Ford, Co-op Food, and Subway who helped us with gear, a van, early morning venues, and sandwiches along the road when we had no time to stop for food, and importantly the incredible grassroots venues and venue owners that worked with us on this. I hope everyone supports them during this crazy time because music is not music without these wonderful people and places. 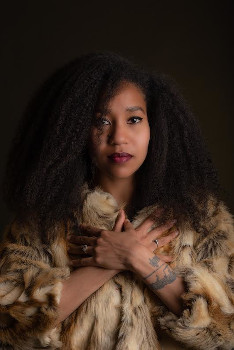 Minhee Jones : Recording 100%. I am a huge perfectionist so like to have complete control of my audio environment without the variables that live inevitably throws at you! I can't even watch videos of myself performing until at least as week has passed because I'm always obsessing over the one thing that didn't sound quite right and I need some time to pass to listen to the performance objectively. Also the magic of being in the studio with a great producer like Peter Fletcher at Black Bay Studio and a ton of instruments and watching the idea you had in your head evolve into this awesome new collaborative project is like a drug to me.

Minhee Jones : Is it bad that it's a cover? Haha I do this electro live-looping version of Radiohead's Creep that is really fun to perform. Of my originals, I'd say it's TTHT (They, Too, Have Teeth) which is a femme fatale anthem where I get to leave the instruments behind and just jump up and down and shout along with a massive drumline!

Minhee Jones : A billionaire with way too much money who was looking for a risky investment in the arts.

Minhee Jones : I'm mostly hoping that my songs will get people to see things differently than they normally would.

Minhee Jones : I've been playing music since before I can remember (age 4) and it's kind of been the one thing in my life that I knew was unquestioningly me because it came so naturally. Honestly, if I was physically able to quit and be in any way happy doing something else I probably would - it would be a hell of a lot easier I think! There's no way I could give up though - I love it too much.

Minhee Jones : Grimes! Or C as she's called these days. I'm obsessed with Art Angels and she's got such a unique yet signature production style. I'd love to work on something with her!

Minhee Jones : I don't think I'm anywhere near what I would consider a musical success - yet anyway! The biggest challenge for me is all the stuff that is now peripheral to being an artist today - the self-promotion and constant social media pressure. I'm definitely someone who would rather enjoy the moment than spend 20 minutes photographing/editing/hashtagging/posting it everywhere. I also get hugely embarrasssed and have major anxiety taking selfies in public.

Minhee Jones : Creating music is hugely therapeutic for me. I get my biggest bursts of inspiration when I'm upset about something and I instantly feel better once I've gone to the keyboard and bashed out a song. It's great to have that outlet. It's also just so much damn fun putting songs together! I imagine it's like the satisfaction people get when they finish a big puzzle.

Minhee Jones : I was supposed to be on tour now promoting my EP but that of course has been postponed. I am now working on a new more social-distancing-friendly plan for releasing my EP later in the year. I'm also doing my first live-stream tomorrow in aid of War Child UK and if that goes well I will be doing more!