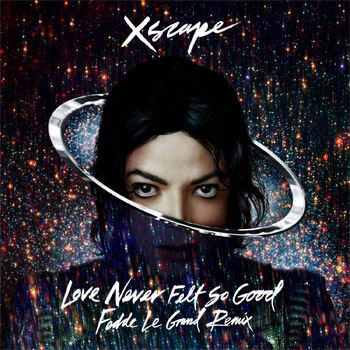 In an interview last year, Fedde Le Grand described how music 'will never have another like Michael Jackson". His legacy to this day influences millions and his approach to composition has forever been a source of inspiration for the Dutch producer. Inspiration and influence aside however, the chance to add your spin on one of the greatest acts to ever live doesn't come around too often for any artist. But with a host of the best producers, songwriters and performers around re-mastering and tying together the King Of Pop's archived material, that opportunity came along for Fedde Le Grand who could hardly refuse such an occasion. Revealed and premiered by Danny Howard on the world famous Radio 1 comes the one and only remix for Michael Jackson's 'Love Never Felt So Good' – the lead single on his second posthumous album 'XSCAPE'.

Instantly going viral and met with a rapturous reception by fans and press alike, the stakes were high for Fedde to honour the first track from XSCAPE with a worthy remix. Up to the task and then some, Fedde treats the record with the honesty and maturity that fans all over the world know and love. Leading in with his typically rousing beat, he furnishes the stunning syncopated rhythm and ever-smooth vocals of Jackson with an original synth riff to lead flawlessly in to an anthemic drop sure to please even the most hardened of fans. The integrity, melody and timeless infectiousness of Michael Jackson's iconic method to music still very much intact, Le Grand only builds on an already master record to glorious effect.

Michael Jackson is one of the most beloved entertainers and profoundly influential artists of all-time. He was also a dedicated philanthropist and an astute business professional. To date Jackson has sold 1 billion records worldwide, released 13 No.1 singles and became one of a handful of artists to be inducted twice into the Rock and Roll Hall of Fame. The Guinness Book of World Records recognised Jackson as the Most Successful Entertainer of All Time and Thriller as the Biggest Selling Album of All Time. Jackson won 17 Grammy Awards including 8 in one year, a record in itself, and received 26 American Music Awards, including the Artist of the Century Award. Jackson defined the art form of music video with such ground-breaking short films as "Billie Jean," "Beat It" and the classic "Thriller," which in 2009 became the first and only music video inducted into the National Film Registry of the Library of Congress. In his short films 'Black or White", 'They Don't Care About Us", 'Bad" and 'Smooth Criminal" and others, Jackson set an aesthetic standard for video production that remains unsurpassed even today. The Estate of Michael Jackson and Cirque du Soleil have produced two top shows: Michael Jackson The Immortal World Tour is the #9 top grossing tour of all time; and Michael Jackson One, a new permanent show at Mandalay Bay Las Vegas, which is breaking box office records and receiving critical raves. Jackson‟s sound, style and dance moves continue to inspire today's performers and new generations of fans worldwide continue to discover his artistry.