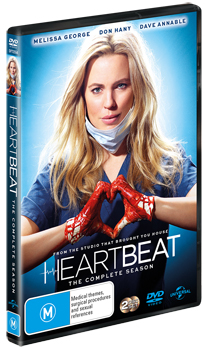 Starring homegrown talent Melissa George (Grey's Anatomy, Home & Away), Heartbeat is one of 2016's newest dramas to join the NBC family. This unique medical drama follows Dr. Alex Panttiere (George) as she navigates the emotional pressures of her personal life alongside the astronomical daily demands in her professional life. Loosely based on the real life achievements of one of the few female cardiothoracic surgeons in the world, Dr. Kathy Magliato, and adapted from her autobiography Heart Matters, Heartbeat - The Complete Season is available to own on DVD from August 18, 2016.

Filled with punchy storylines that will have you glued to the screen and on the edge of your seat the whole way through, Heartbeat- The Complete Season is available to own on DVD from August 18, 2016.

Inspired by the life and work of Dr. Kathy Magliato, one of the few female cardiothoracic surgeons in the world (her memoir, 'Heart Matters," was published in 2010), Heartbeat follows the professional and personal struggles of George's headstrong heart-transplant surgeon, Dr. Alex Panttiere. Unconventional and unorthodox in the operating room, her approach to everything else in life equally knows no boundaries – a life that includes a tumultuous love triangle with two surgeons (costars Dave Annable and Don Hany), two kids, and a gay rock star ex-husband (Joshua Leonard).

Born and raised in Perth, Australia, George first made her mark in the long-running Aussie soap, Home and Away in 1993. In film, she's starred in Alex Proyas' Dark City, The Limey (for Steven Soderbergh), and David Lynch's Mulholland Drive. On TV, George is the winner of a Golden Globe for her work on the first season of the HBO's, In Treatment.

Developed by veteran TV-scribe, Jill Gordon, production on Heartbeat began last summer but was put on hold to accommodate George's real life pregnancy (she gave birth to her second son, Solal, in France last autumn before returning with her family to LA in January to complete the first season).

Question: How did your casting on Heartbeat come about?

Melissa George: I was in New York, in Bergdorf Goodman of all places, when my agent called: 'I've just read a pilot that they've offered to you," which made me weary. I'm like, 'Oh really? No reading? No audition?" 'It's one of the best female roles I've read in years. It's got comedy, it's got drama, it's got emotion, it's medical, it's funny, it's gutsy, it's everything. I'm not even going to ask you, I'm making the decision for you, you're doing it."


Question: How would you describe your character, Dr. Alex Panttiere?

Melissa George: She's a woman who just wants to save lives. And if it means breaking the rules then she'll do it. (Laughs) They say roles come to you because you can relate to them!


Question: Your character, Alex, also has children, I understand.

Melissa George: She has two kids as well. And she was pregnant while she was working and I was very pregnant. The last week of filming the pilot I went and did a pregnancy test. And I was like, 'Oh my god. I bet the show is going to get picked up." Because everything comes at the same time.


Question: And you continued working once the show was picked up.

Melissa George: We just did some CGI to remove the belly bump. And I worked until I was 8 months pregnant.


Question: Better than hiding behind bookcases.


Question: What's it been like working with Kathy Magliato? What's her contribution to the show?

Melissa George: Kathy Magliato wrote a book called 'Heart Matters". That's how the show came about. It's the memoir of being a mother, a girlfriend, a lover, a doctor - one of the best surgeons in the world - and the complexity that that comes with that. But to work alongside Kathy is just incredible. I mean she is something else.


Question: Did you get the chance to watch an actual procedure?

Melissa George: I did. I was in Paris, where I spend a lot of my time now. A good friend of mine is a sensational heart surgeon there. And he said, 'why don't you just come with me?"

Melissa George: I got to witness an open-heart surgery. For eight hours I was standing there, next to the man- cutting open the chest, opening it up, rotating the body and taking out the heart.


Question: Could you see yourself performing surgery in real life?

Melissa George: Maybe after eight seasons (laughs). It tricks you. As an actor you get tricked. You invest so much to make it look authentic that it fools your brain to thinking that you could, probably (laughs). But they had somebody in the surgery to catch me if I was going to pass out.


Question: A surgeon is often regarded as a -god' in an operating room…

Melissa George: Yes – because it's up to her whether that patient wakes up or not. That's a lot of power to give to somebody. Some take it in the wrong way. But being a female in what I saw, watching the male surgeons, it's a man's world. Trust me. Kathy Magliato told me that you have to be extra good because you're a woman and extra loud to get your voice heard. So the way I'm playing this role – well, let's just say she's not cocky. She just knows that not only is it up to her whether that patient lives or dies, but that she's the best at what she does.


Question: What has been the biggest challenge in making the show?

Melissa George: There's a lot. It's the hours. I'm also doing an accent. The same guy I worked with for the American version of The Slap (Doug Honorof). We did a Brooklyn, New York accent for that, and now we're doing a very well-educated Californian accent. And then I'm breast-feeding. I had three months off to go and give birth, and then when my baby was 6 weeks old, we got on the plane to come back to set. I've been traveling, working nonstop with my babies at my side.


Question: It must be hard.

Melissa George: It is. But I'm so lucky. I'm the luckiest I've ever been in my life to be honest. I've had a lot of good luck in my life, but this particular point I'm extra lucky. I have a partner that's so supportive of me working. I have two healthy sons. And I'm working on a show that's my show, which has been a long time coming.


Question: You've benefited for some time from great writing – by women for women, Working on Grey's Anatomy with Shonda Rhimes. The Good Wife etc.


Question: How much do you think writing for women in television has changed in the time you've worked in America?

Melissa George: It's unbelievable. I'm starring in a female driven show, written by Jill Gordon, based on Kathy Magliato's book. And then the writing staff are mostly women.


Question: What does it feel like to be No. 1 on the call sheet?

Melissa George: It's been a long time coming - but thank god. I was always told, 'Slow and steady, Melissa, slow and steady". I've been working for 20 years straight now. Twenty years. And I feel like to be number 1 on the call sheet, you need stamina, a sense of humor. Yes, okay, you want talent. But you need a lot of other things that I think twenty years gives you.


Question: Do you feel a sense of responsibility as well?

Melissa George: Big responsibility. But that's okay for me. I've been responsible for a long time now. You know, when I did Home and Away, I was a baby. My parents let me travel alone and pay rent at 16. So for me, responsibility has never been something I've had to learn.


Question: What would that 16-year-old girl make of your journey today?

Melissa George: There's a moment that I think about all the time. I was alone in my apartment in Milson's Point, an amazing apartment that the Home and Away execs had given me at barely 16. I was rehearsing a scene, opening the kitchen fridge, running my lines. I was so driven to be good at it, and I've never lost that drive. You know, most people just fizzle out. But it was such a moment for me that I was like, oh my god. I have that moment inside me all the time, still.


Question: I was going to leave the topic of roller-skating tucked away in ancient history. But they tell me you roller-skate in the first season.

Melissa George: -The Plunger Games…' You know, instead of The Hunger Games, we do this competition in the hospital to raise money. You're seeing Millicent (co-star Shelley Conn) on stage and then you just see me skating past camera. Like a really big show off. My mom was there that day. She's like, 'I think she's showing off!"


Question: What was your parent's reaction to Heartbeat?

Melissa George: They loved it. Mom hadn't seen it yet, so I brought home the pilot and Episode 3. And I was looking at her. She was sobbing and then laughing and then crying. She said 'Oh love, I rather like this one!"


Question: What for you sets the show apart?

Melissa George: To me, the cast. When you watch the show, I feel each character, whether it's Maya Erskine's character, Shelley Conn, Don Hany, Dave Annable or Jamie Kennedy - to me they jump out. And the writing is really special. You feel something, and then you laugh. It's not ER. It's not Grey's Anatomy. It's unique. So yes, it's the cast,the writing and the storylines. They're really unique. And by the way, at the end of the season, I do something that no female has ever done on TV before.


Question: And I get the feeling you're not going to say what that is.

Melissa George: I can't (laughs). But it's so incredible that even I was like, 'Are you kidding me?"