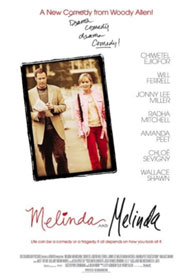 Life Can Be A Comedy Or A Tragedy, It All Depends On How You Look At It.

Synopsis:
'Melinda And Melinda' combines romantic comedy and drama in a way that Woody Allen, unique among filmmakers, likes to contrast. It takes place in Manhattan and chronicles a pair of crises that give great rein to the funny and serious talents of Chiwetel Ejiofor, Will Ferrell, Jonny Lee Miller, Radha Mitchell, Amanda Peet, Chloë Sevigny and Wallace Shawn. All the usual Allen areas are explained-the fragility of love, marital infidelity, sophisticated romance, the inability to communicate. As a character in the movie puts it, "He's despondent, he's desperate, he's suicidal. All the comic elements are in place".

My Verdict:
Four friends, including Sy (Wallace Shawn) and Max (Larry Pine), are gathered at a trendy New York restaurant for dinner where a discussion leads to the different ways the same scenario can be viewed, all dependent upon your outlook. A woman is fabricated -Melinda -and both Sy and Max see her story from a totally different perspective, one comic and the other tragic. It is their two versions of the life of this one person that are then simultaneously portrayed on screen, both stories delving into human nature, the course of relationships and the vulnerability of love in true Woody Allen style.

The idea here to portray two possible lives of the one woman in parallel is an idea that Allen has had for many years and is conceptually distinctive. Rather than just go with one story, splitting it offers the opportunity to deliver what almost feels like a combined film, yet, because the central character is common to both, it feels curiously like a single unit. Initially it is hard to remember just which characters belong to which Melinda's story, but as the momentum gathers and the stories unfold, there is no doubting just which Melinda is being portrayed -both having a different hairstyle helps enormously.

Radha Mitchell plays both Melinda's with style and class. One Melinda arrives unexpectedly at Lee (Jonny Lee Miller) and Laurel's (Chloë Sevigny) apartment asking for a place to stay and the other Melinda befriends Susan (Amanda Peet) and Hobie (Will Ferrell) proceeding to upend relationships already in place, usually unintentionally. It is this upheaval that is the catalyst for the narrative.

Will Ferrell is the standout, which could be because he gets the best lines, but it's his delivery that is the winner. He is a wannabe actor lacking confidence whose marriage is threatened and finds himself attracted to Melinda, unbeknownst to his wife Susan, who is busying herself as an up and coming director. Meanwhile, the other Melinda has arrived at Lee and Laurel's whose relationship is slowly coming apart, especially after music-teacher Laurel meets pianist Ellis (Chiwetel Ejiofor) at a party. All players have reached a point in their lives just ripe for reassessment and Melinda's arrival sparks the flame to begin the process.

'Melinda And Melinda' is just so typical Woody Allen. The often cynical and pessimistic approach is interspersed with wry wit and humour that is true Allen style and although it is well worn, it still has its enormous charm. Added is a characteristic Allen musical score that is so typically apt. Yes, this is just more of the same from Woody Allen, but really, there is nothing wrong with that.