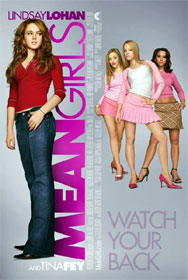 Synopsis:
Reunited with her 'Freaky Friday' director, Mark S Waters, Lindsay Lohan plays Cady Heron, who, as the film opens is being farewelled by her tearful parents (Ana Gasteyer and Neil Flynn) as she leaves for her first day of school! Although she's 16, Cady has never actually attended a real school before and has been home educated in Africa where her parents have worked as anthropologists. Well versed in the ways of the animal world, Cady is about to venture into another kind of jungle.

After an embarrassing introduction to a very unfriendly class, Cady is befriended by sharp-tongued goth, Janis Ian (Lizzy Caplan) and Damian (Daniel Franzese) her "too gay to function" best friend, who quickly point out the many student factions that divide up the school. They warn her to steer clear especially of "The Plastics" comprising bitchy campus queen, Regina George (Rachel McAdams) and her two vacuous toadies and followers of fashion, Gretchen (Lacey Chabert) and Karen (Amanda Seyfried). What follows is an attempt by Cady to fit in. But choosing is the hardest part and every now and then a touch of black comedy surfaces in 'Mean Girls', giving it a welcome and unexpected edge as it makes some very sharp - and funny - observations.

My Verdict:
Lindsay Lohan is fast becoming a favourite choice to play the teenage girl with a problem and is doing a fine job at it. In 'Mean Girls' she plays another yet another teenager, Cady, with a problem of how to fit in and more importantly with whom. The title of the book on which this movie is based is 'Queen Bees and Wannabes: Helping Your Daughter Survive Cliques, Gossip, Boyfriends and Other Realities of Adolescence'. Although very American, it could certainly apply to any female teenager in her final years at high school.

Cady hasn't learned class structures or pecking orders and is very naïve when she first starts formal schooling. She jumps from one group to the next; oblivious to the fact that this is not the done thing. She only wants to fit in and do the right thing but a crush on a fellow student, Aaron (Jonathan Bennett), will be the catalyst of her downfall as he is the ex-boyfriend of head 'Plastic' Regina. Regina is so named because she is 'The Queen Bee', Regina being Latin for queen. A plot is quickly hatched to unravel all the groups, which takes up the bulk of the movie.

This is a story about relationships and our endeavours as teenagers to find whom we are and where we think we fit in. The movie has many funny moments where you almost feel like cheering, be it for the underdogs or the undoing of some dubious behaviour. It obviously concludes with a very fitting moral which isn't too schmaltzy or saccharine sweet and shows us that these dilemmas will always be facing teenagers no matter how hard the adults try to cease them. Funny also is the adults attempts at trying to avert war.

Lindsay Lohan is a great Cady who certainly looks and acts like she could belong anywhere. She is natural at being the quintessential teenager, which was necessary for such a large role. And don't worry about learning any new ways at being mean - teenagers have had that covered for centuries and perhaps always will. Just see this movie for a fresh and fun approach to a well worn topic that will let you leave the cinema with smile.