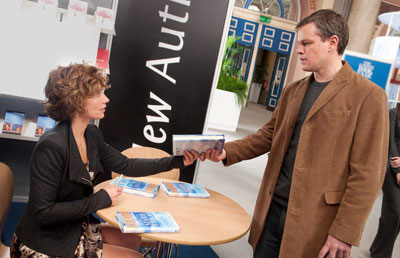 Question: Tell me about working with Clint Eastwood again.

Matt Damon: It's just the call that every actor wants. He's such a terrific person to work for. He creates the best environment for everybody to work in. He just knows so much about filmmaking and he really knows, I mean I assume, he can do everybody's job on the set as well or better than they can. Yet he doesn't try to control everything in an iron fisted way. He's very confident and so what he tries to do is create an atmosphere where people can innovate a little on their own and come up with ideas and be creative and he ultimately is the arbiter of taste. So if someone comes up with something, if he likes it he'll use it and if not he won't. As a result he really gets the best out of everybody around him. It's a very permissive environment in which people feel like their work is respected.

Ultimately it's Clint, so every person on the set feels pretty privileged to be there. You know you're on the mountaintop when you're working with him.


Question: You're playing a very interesting and lonely character. Who is he in your eyes?

Matt Damon: He's a really lonely guy. All these three characters really need each other to kind of be completed and fulfilled. It's interesting, it's a love story but Cecile's character and my character don't meet until the very, very end of the movie. I like that; it's a very different type of love story. You get to know each of them individually and kind of get a sense of why they really would be great together. So, for most of the film you're seeing my character struggle with this kind of loneliness and he's trying to meet people. He's trying to start and strike up relationships and friendships and romances but he just doesn't have any luck. 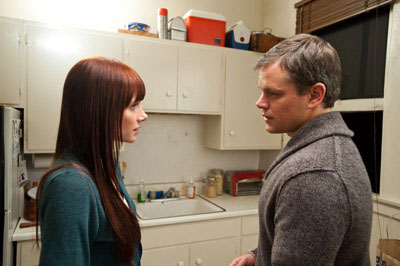 Question: Was it exciting to work with great actresses like Cecile [De France] and Bryce [Dallas Howard] as Melanie and Marie?

Matt Damon: Yeah, they're terrific. I would have loved to have had more scenes with Cecile. It's interesting watching a movie like this where there are three different storylines, because I wasn't there when she shot her storyline. So, it's almost like I'm watching another movie when I see her. I can be very objective about it. How just wonderful and authentic she is and how full her performance is. She's just a really exceptional actress. With Bryce, she had to cram the entire life of the character into four days of filming which is a really hard thing to do. I always marvel at supporting actors who can come in and work at a very high level right away, without any chance of getting into the mood or the energy of the shoot. They come in and just are expected to kind of knock it out of the park; then they're done. It was like a mini movie. It was just less than a week and she did the entire arc of this thing and she was just wonderful.


Question: How does shooting on location in San Francisco and in London benefit you as an actor?

Matt Damon: It was great. You never know what kind of stuff you're going to get from being in real places. You become constrained by your environment and that can really lead to great stuff. When we were in that kitchen that Bryce and I shoot, it was a real kitchen in this apartment where we shot the scene, where eventually I give her a reading. My buddies on the crew, some found themselves in positions that I don't think they'd be in - up against the wall with one leg up. There's an intimacy about that whole sequence that, if you could fly the walls out, you might somehow lose. It's an energy almost that you get from really being in these places where the walls won't move. You have to figure your way around the practical realities of the space.

Hereafter tells the story of three people who are haunted by mortality in different ways. Matt Damon stars as George, a blue-collar American who has a special connection to the afterlife. On the other side of the world, Marie (Cecile de France), a French journalist, has a near-death experience that shakes her reality. And when Marcus (Frankie/George McLaren), a London schoolboy, loses the person closest to him, he desperately needs answers. Each on a path in search of the truth, their lives will intersect, forever changed by what they believe might-or must-exist in the hereafter.